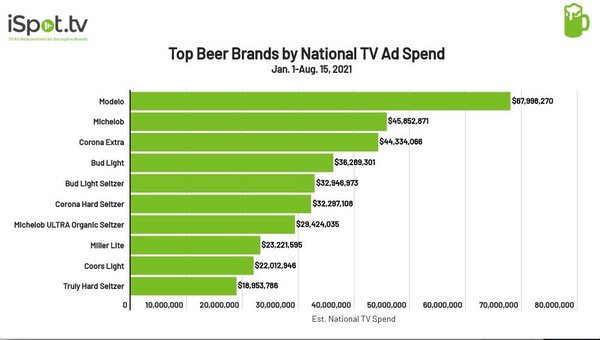 Beer advertising on linear TV in 2021 has risen 49% year-over-year through August 15 -- with spending estimated at $525.8 million, according to data from iSpot.tv. The researcher attributed the surge largely to the return of live sports, with 56% of the spend so far this year coming in such events as NFL, NBA and college basketball games.

Spending on another AB-owned Mexican beer, Corona Extra, increased an even greater amount -- up 132.7% to $44.3 million.

Modelo was identified as the advertiser in “The Fighting Spirit of Philly” spot by 82% percent of survey respondents.

Corona Hard Seltzer’s “Calling Your Name” was found to be cinematic” and “soothing.”

Smirnoff’s Red, White and Berry Seltzer’s “Nice Suit. Flavor on 100. Sugar on Zero” was lauded for the use of Anthony Anderson (“Black-ish”) as spokesperson.