Despite heavy Nielsen spin -- on- and off-the-record, as well as to its investors -- that accreditation of its ratings services doesn’t actually matter, the consensus among some of its biggest customers is that the credibility of its services have been tarnished by the Media Rating Council’s (MRC) suspension of both its national and local services.

“The united buy/sell marketplace decision to suspend Nielsen’s national and local market accreditation must be seen by Nielsen as a loud change-or-die challenge,” Sean Cunningham, president-CEO of the Video Advertising Bureau said in a statement following the MRC’s announcement Tuesday.

Cunningham, who has been among the most vociferous critics of Nielsen following revelations that it has been underreporting audience estimates, added: “In fact, all measurement and currency providers with big future aspirations in the video advertising sector must take the 2021 mandate for real transparency, full and deep audience capture, urgent innovation and rigorous verification as mission-critical for them all. Advertisers should expect to see more innovation in the next three years in video measurement and currency than what was achieved in the last 30 years, time has officially expired on friction and frustration.”

“Measurement innovation requires us to collaboratively explore our options, evaluate multiple independent yardsticks, and expand the possibilities for our industry – because that’s how we become independent from our past and interoperable for our future,” Kelly Abcarian, executive vice president-measurement & impact, advertising and partnerships at NBCUniversal, and a former top Nielsen exec added in a statement, noting: “Transforming measurement is a team sport. We are looking forward to collaborating to make sure new measurement yardsticks are accurate and accountable and built on a foundation of fairness, trust, and shared values — so we can keep competing for audience and programming on the playing field we all deserve.”

While few other Nielsen customers have gone on-the-record with responses, a Disney Advertising Sales spokesperson issued a statement asserting: “Accurate measurement of our content – as it’s enjoyed across linear, streaming and digital platforms – is paramount at Disney. To that end, we work with multiple data and measurement providers, including Nielsen, to develop best-in-class solutions for our partners.

“We have become increasingly concerned with inaccuracies and irregularities in the data reported by Nielsen, and urged them to more quickly pivot their processes and practices to fix known issues.

“We are, and have always been, in support of two fundamental paths: first, the evolution of Nielsen’s methodology and measurement to encompass all the ways people watch content today; and second, the imperative for the industry to have accreditation to ensure the quality of the data upon which we transact.

“The modernization of Nielsen's measurement is long overdue, and that goal is critically dependent on the integrity of the panel, which remains compromised. We applaud the VAB and the MRC for taking the necessary steps toward quality data and transparency in the marketplace.”

Nielsen, which has downplayed the significance of losing MRC accreditation, including remarks to shareholders by CEO David Kenny during earnings calls, issued its own statement nonetheless expressing disappointment about the MRC’s decision

“The Media Rating Council responded to Nielsen’s request for a hiatus in accreditation with a vote to suspend our national TV ratings service, as well as our local TV ratings service,” stated a Nielsen spokesperson, adding, “While we are disappointed with this outcome, the suspension will not impact the usability of our data. Nielsen remains the currency of choice for media companies, advertisers and agencies. We are committed to the audit process and during this pause in accreditation we will work with the MRC on resolving this suspension. We will also take the opportunity to focus on innovating our core products and continue to deliver data that clients can rely on, ultimately creating a better media future for the entire industry.”

In a letter sent to clients Tuesday, Nielsen CEO David Kenny said Nielsen understands and accepts the issues laid out by the MRC as the basis for its suspensions, but told them to "rest assured.

"We will continue to provide the most representative, reliable and robust audience measurement available, which the market can continue to trade on with confidence. While we work to remediate issues raised by the MRC, we think it’s also critical to continue building a media future that accurately measures and reflects the consumer cross-platform journey and keeps pace with rapid technological advancements." 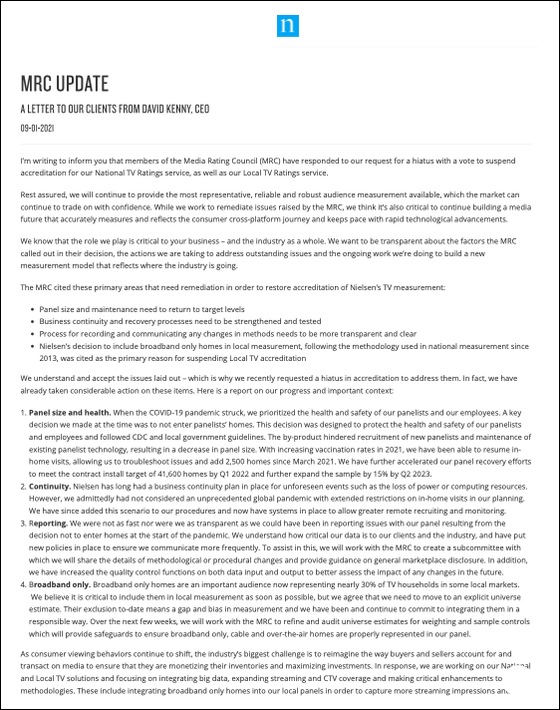