Google confirmed on Twitter an “account outage issue” that caused some ads to stop serving for a period of time Wednesday afternoon, but it has since been resolved.

Marketers who saw issues with their account billing issues were not alone. The outage prompted some confusion among advertisers until Ginny Marvin, Google Ads Liaison, stepped in on Twitter to explain in a tweet that “there was an account outage issue in the afternoon (PST) of 22nd September, which caused some ads to stop serving temporarily.”

Digital Marketer Matt Poldberg had six accounts, not linked, receive billing alerts — nearly all at the same time. As of Thursday, all still had a “warning banner” at the top of the page in Google Ads interface, but there were no problems in the transactions section. Ads continued to run.

Paid-search marketing specialist Leslie Drechsler also chimed in. She wrote on Twitter that ads were paused due to a billing issue, but her accounts had not reached the threshold, and there were no billing alerts in her account as of between 4 p.m. and 6 p.m. Pacific Standard Time.

As of Thursday, Allaina Abraham, senior search manager at Wealthsimple, still had issues. She tweeted that his accounts were paused due to a credit issue despite all invoices already paid. 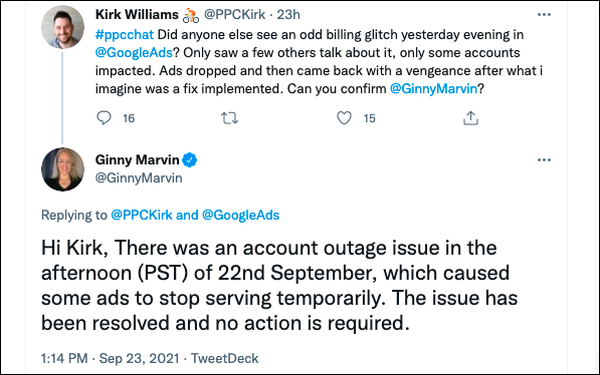