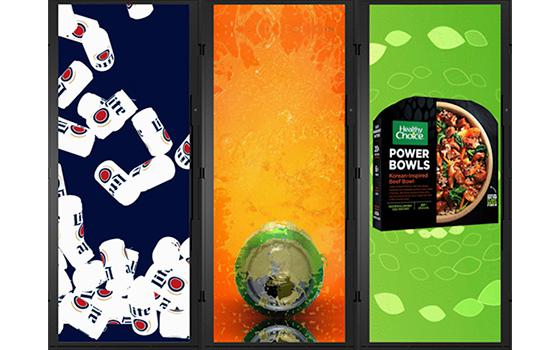 The technology leaves behind the cookieless world and privacy concerns to rely on in-store contextual targeting to create a different type of connection between brands and consumers.

The system is built on an engine and data-graph technology that consistently collects consumer behavior signals in real-time using video and IOT sensors.

It maps and identifies signals like motion and attention, the type that have become common on ecommerce sites. It took online signals and transitioned them into retail stores.

Think about how targeting on websites works. “Opening the door is equivalent to a click,” said Arsen Avakian, Cooler Screens CEO and co-founder. “Rather than a mouse in a browser, we’re looking at the shopper.”

He said “Oh, look, the shopper is walking by the door -- don’t even waste an impression. If she pauses at 5 p.m. in the frozen food aisle, then we serve the ad, which might have a QR code for a recipe.”

The screens, which consumers can find in some Walgreens and other types of grocery stores, supports a different type of data to target consumers with ads or messages. They are in 30 major U.S. markets, where more than 93% of grocery and health-related purchases occur.

Online, technology monitors the consumer continuously to understand what someone clicked on, how long did she remain on the page, or did the person scroll down the page? Advertisers have been doing this online, but not in stores. In the store, it doesn’t matter who’s standing in front of the frozen food case, as long as they meet the criteria of the signals.

Along with the time of day, outside weather conditions are taken into consideration.

It’s 3 p.m., 90 degrees outside, and the consumer is hanging out in front of the ice cream door for more than 3 seconds. It may seem simple, but serving up an ad or message for a specific brand on the Cooler Screens can prompt a sale.

Avakian calls it an retail media network. “In early pilots we concentrated on how to make it valuable to consumers,” he said. “The concept of consumer experience is behind everything we do. … When consumers started saying ‘the information I’ve getting on the screens is relevant,’ we knew we had something.”

The screens seem to bring the qualities of online shopping that people love such as choice, transparency, ease, and personal relevance, into brick-and-mortar stores. Contextual targeting based on consumer trends within a store to provide relevant messages for one.

A major soft drink brand dramatically increased brand awareness and sales in a competitive category through targeted advertisements. After running the campaign the brands outpaced sales trends within their category by 15 points, and increased brand sales 6.4 points faster in stores with Cooler Screens than those without, according to the company.