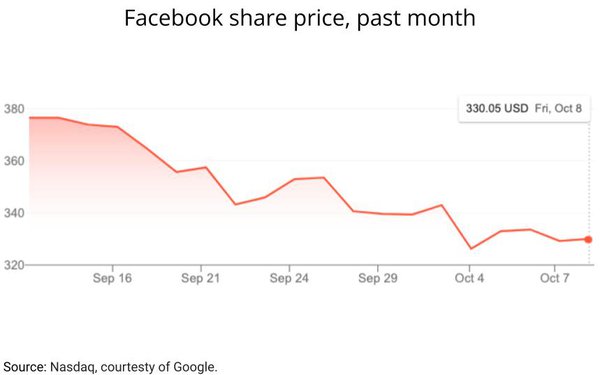 To say Facebook has had a volatile month is an understatement, but that's how the equity research team at BMO Capital Markets characterizes the impact of multiple "headwinds" on the social network's investor confidence -- including a "deluge of negative headlines," as well as the material impact of Apple's App Tracking Transparency (ATT) framework.

What I didn't expect to see was that a primary beneficiary of Facebook's troubles would be the connected TV (CTV) advertising marketplace.

But that's what BMO's quarterly discussion with a panel of ad industry executives suggests, according to analyst Daniel Salmon, noting, CTV has been "benefitting" from Facebook's fallout, especially its "four majors:" Amazon, Roku, Disney/Hulu, and Google/YouTube.

Despite the volatility, Salmon continues to reiterate his "outperform" rating for Facebook's stock, noting that much of the impact from Apple's app-tracking chances have already been felt, and though he doesn't say it, all the negative headlines, Congressional blustering, and public outcries are likely to amount to much ado about nothing.

In fact, Salmon singled out comments from GroupM's Brian Wieser suggesting the impact of Apple's changes on Facebook has not been "noticeable" and that there is nothing to suggest that it's anything more than what was anticipated.

Oh, and Wieser also noted that there is an incremental $8 billion in ad spending going to Facebook from Chinese companies that have largely been operating below the radar.

In other words, it wasn't actually such a terrible, horrible, no good, very bad month for Facebook, even if it was -- as the Congressional hearings suggested -- for the teenage girls using its platforms.