Why Conservatives Always Get What They Want 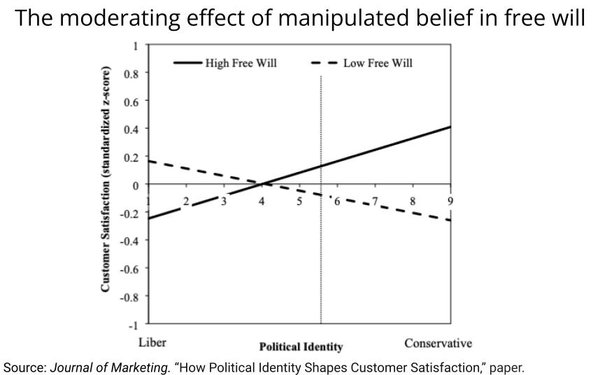 In a finding that could challenge the acceleration of political activism among some major brands, a massive academic research study concludes that Americans who deem themselves politically conservative have much higher levels of customer satisfaction -- for virtually every category -- than those who consider themselves liberal.

The main reason, its authors say, is that Conservatives are more wired to believe in “free will,” which makes them more predetermined to trust their own purchase decisions and, therefore, feel more satisfied with them.

The finding, which is based on an analysis of 326,532 customers across a wide range of categories -- industrial goods, restaurants, educational videos and health insurance -- could also explain why Conservatives are so satisfied with the choices they make in one particular category: the political candidates they support.

While the study does not explicitly address voter satisfaction with the candidates they vote for, it is a form of consumer purchasing -- and while only some actually pay for it with money (campaign donations), others do with their votes.

“People with higher belief in free will see their life, destiny and outcomes as being under their own control rather than being predetermined,” he continues, adding: “Due to higher free will beliefs, conservatives are more trusting of their own purchase decisions and feel more satisfied with their purchases. Over time, customers feel good about themselves, thinking ‘I chose a good product,’ and (feel) more satisfied with their choices.”

So why is this a potential red flag for brands taking a politically active stand? Because the researchers believe taking sides could “backfire because it forces companies to choose sides, whether liberal or conservative,” and that in turn will marginalize some of their potential consumer base.

“Instead of choosing sides, companies should relentlessly focus on increasing customer satisfaction to drive sales,” Mittal says, adding: “Doing so will be appreciated by their conservative customers more than their liberal customers, but both will be more loyal, engage in higher word-of-mouth and recommend the business more.”

On the other hand, it explains why political brands -- you know, candidates and their campaign teams -- can more easily rally continuing support from their Conservative base, than from Liberal ones.

Looked at from the perspective of consumer marketing, Rice's Mittal cites the cultivation of customer satisfaction as "the Holy Grail" for any form of successful marketing.
In a 2021 study, he found that a one-point increase on a seven-point scale measuring satisfaction resulted in 12% sales growth from voters -- er, I mean consumers.

These findings go a long way toward explaining why the former twice-impeached president likes illegally playing the Rolling Stones' "You Can't Always Get What You Want" at his campaign rallies. But maybe he should start stealing "Satisfaction" instead.