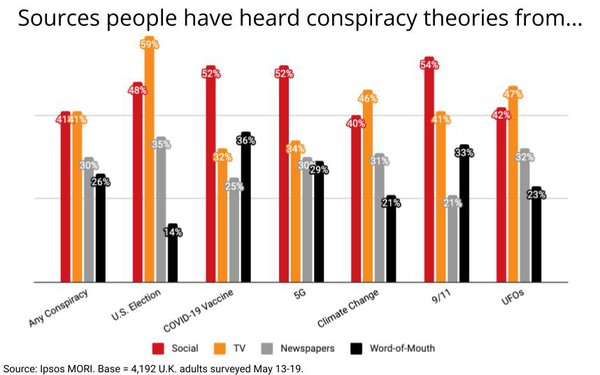 While conventional wisdom may be that social media platforms are the primary source for spreading conspiracy theories, new research indicates television often is just as bad -- or even worse.

The study, which was released this week by Ipsos MORI, is based on a survey of British adults conducted in May, but the authors say it likely is representative of people in other markets.

One of the top-line findings of the study, however, is that the nature of conspiracy theories -- the degree to which people actually believe in them, how they spread or take actions once exposed to them, and how they utilize media to do that -- is much more nuanced than previously thought, and requires a thorough assessment of the "content" and "context" for marketers, governments or other institutions to effectively respond to them (see related column in today's Marketing Politics Weekly).

The study, entitled "Tackling Conspiracy Theories," was not conducted for a client, but was fielded by Ipsos MORI as a public service.

It examined a range of popular conspiracy theories, and also asked respondents what media they heard it from, including other people (word of mouth). Some of the ones most relevant to the U.S. are shown in the above chart, but on an overall basis of "any conspiracy theory," the same percentage (41%) cited TV and social media as their source.

For certain theories -- including the outcome of the 2020 U.S. presidential election being "falsified," climate change being a hoax, and government involvement in UFOs -- TV outweighed social media as the dominant source.

The study also provides another snapshot of the overall trustworthiness of various societal institutions, and not surprisingly, shows media being among the most distrusted -- just one percentage point behind political institutions.

In an encouraging sign for many brand marketers, "business" ranked relatively low in terms of being "untrustworthy." 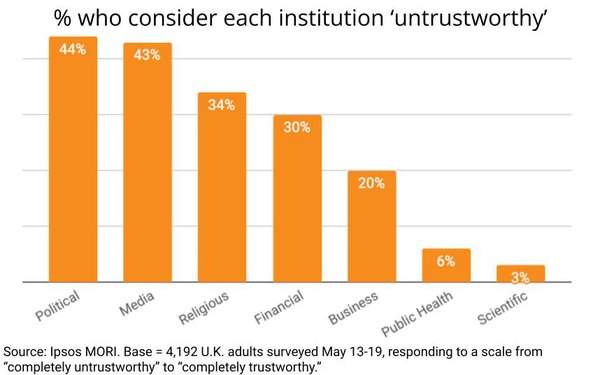