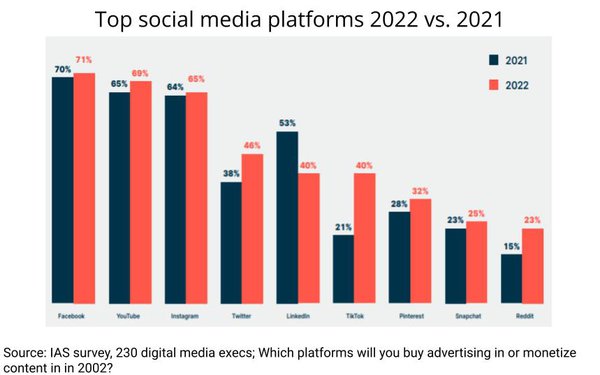 Mobile media top the list of 2022 media priorities, according to a November online survey of 230 U.S. “digital experts” by Integral Ad Science (IAS).

One third of respondents were advertiser and brand executives, 18% media agency executives, 22% publishers, and 15% creative agency executives. The remainder were from ad networks and exchanges, supply-side and demand-side platforms and trading desks.

Asked which media environments and ad formats will be top priorities in the year ahead, 76% cited mobile (including apps and web), 72% social media, 61% digital video (including over-the-top and connected TV), 56% desktop environments, and 48% digital audio/podcast in-stream display.

Mobile video, in particular, is poised for growth. “As more consumers shift from remote work to hybrid lifestyles, mobile video streaming is on the rise, and 86% of media experts see it as a key opportunity in the year ahead,” reports IAS.

More than 80% also said that contextual targeting solutions will gain favor in mobile app and web environments; that expanding 5G adoption will create new advertising opportunities; and that third-party verification will be key in ensuring the quality of mobile inventory.

However, 77% said that ad fraud will be a greater concern across mobile environments in the coming year, and within mobile, web video and in-app video are seen as most vulnerable to both ad fraud and brand risk.

But 79% said ad fraud is a top concern with social, 49% said social media will be vulnerable to brand-risk in 2022, and 60% cited eroding consumer trust as a key factor in adjusting social spending for the year.

Overall, 56% said they’re likely to adjust social ad spend due to insufficient quality media metrics (ad fraud, brand risk, viewability), although that was down slightly from 2021 (59%). On this front, respondents express most dissatisfaction with Facebook, Instagram and TikTok. 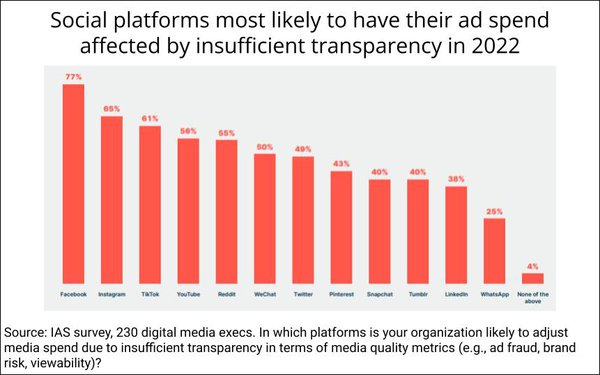 Looking at television, 82% agreed that consumers’ shift away from linear TV towards digital video alternatives will accelerate, 79% that ad-spending shift in the same direction will accelerate, and 77% said that ad buyers will expand into more streaming services as consumers diversify their platforms.

Nearly half (46%) said that CTV and digital video hold the most potential for innovation in 2022.

And despite statistics showing a rise in fraudulent ad activity in unprotected programmatic CTV (certainly in Q4), just 10% of respondents said that CTV will be the environment most vulnerable to ad fraud in 2022, down from 26% last year. “This decrease signals growing confidence in the industry’s ability to counter invalid traffic threats on one of the hottest environments of the moment,” according to IAS.

Looking at digital audio,78%agree that ad-supported audio streaming will grow in popularity among consumers, and 75% expect ad investment in this medium to expand in kind.

However, 27% think that digital radio will face serious challenges across the media industry in the next 12 months (more than double last year), and 81% say that third-party verification will be important to ensure the quality of this inventory. 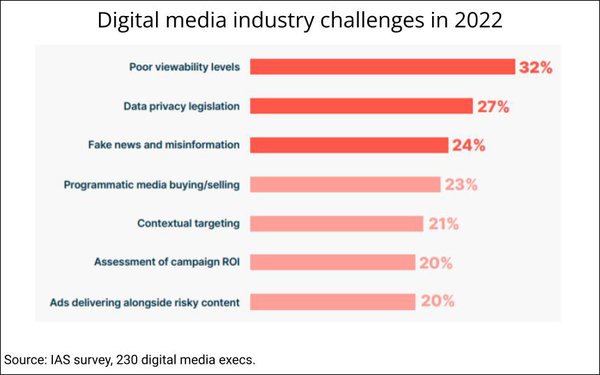 Social media and linear TV continue to be the media most-cited as presenting advertising challenges, but this is less pronounced than in last year's survey. 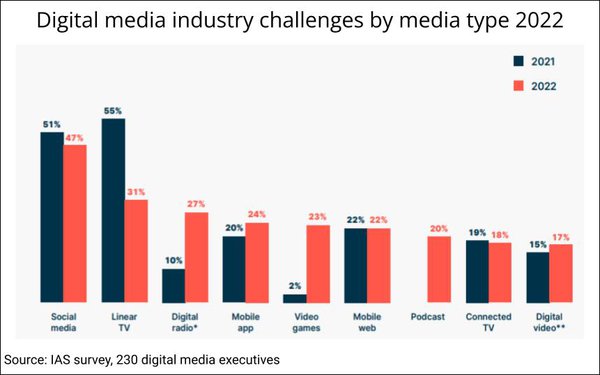 Looking at digital environments perceived to be most vulnerable to ad fraud, far fewer of this year's respondents view programmatic advertising, along with CTV, as most problematic, but perceptions of social media's safety appear to have deteriorated. 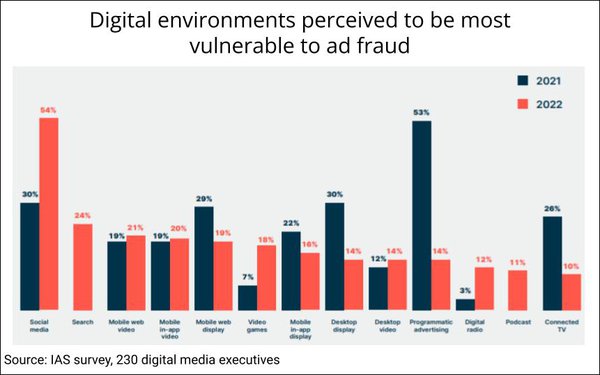 When it comes to perceived brand risk, social media is still the most-cited medium. In this area, too, programmatic's perception is significantly better among this year's respondents than last year's. 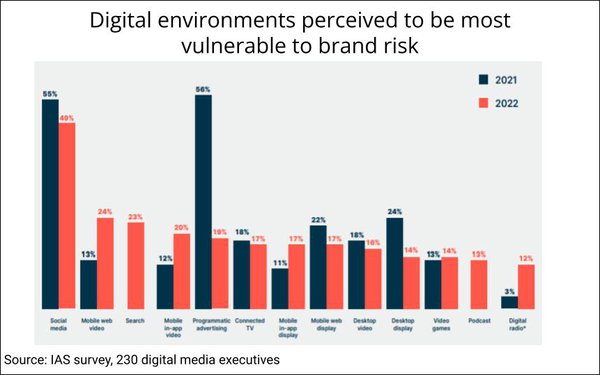