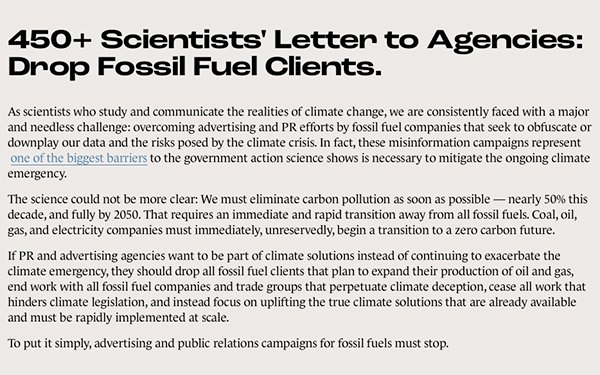 More than 450 scientists on Wednesday called on executives of major advertising and public relations firms to drop their clients that are marketing and selling fossil fuel. They also called on them to stop the spread of disinformation around climate change.

The scientists sent a letter to executives of major global public relations and advertising firms such as WPP Group, Edelman and IPG, and also plan to send it to the CEOs of Unilever, Amazon and Microsoft, among others -- all brands that tout sustainability goals.

“As scientists who study, and seek to communicate, the realities of the climate emergency on both the planet and people, we are constantly faced with the challenge of overcoming advertising and PR efforts by fossil fuel companies that seek to obfuscate or downplay our data, and the risk of the climate emergency,” the letter stated. “In fact, these campaigns represent one of the biggest barriers to the government action science shows is necessary to mitigate the ongoing climate emergency, and avert total disaster.”

The scientists released the letter a little more than a week after Edelman, a PR company, announced that after an internal review of its clients the company would not drop any fossil-fuel contracts, but that future work would be guided by scientific principles.

Fossil-fuel companies and the firms they do business with are fighting for attention from consumers, turning them into one of the biggest sectors of advertising worldwide. Despite the promise by automakers of a transition to electric vehicles, these companies are among the biggest spenders when it comes to Google paid-search ads. Some call this an example of “endemic greenwashing.”

Earlier this month, U.K. media outlet The Guardian analyzed ads served on Google search results for 78 climate-related terms, in collaboration with InfluenceMap, a think tank that tracks the lobbying efforts of polluting industries.

ExxonMobil, Shell, Aramco, McKinsey, and Goldman Sachs were among the top 20 search advertisers, while several other fossil-fuel producers and their financiers also placed ads, The Guardian reported.

The results are focused on the U.K. and show that more than one in five ads seen in the study -- more than 1,600 in total -- were placed by companies with significant interests in fossil fuels.

Dr. Gary Yohe, Huffington Foundation Professor of Economics and Environmental Studies, Emeritus, at Wesleyan University, in a statement said he hopes the letter will serve as a wakeup call for them to preserve their credibility by ending their complicity.

“For decades, fossil fuel companies have used greenwashing campaigns to hide from public accountability and attack climate scientists who speak the truth even though they have frequently spread misinformation.