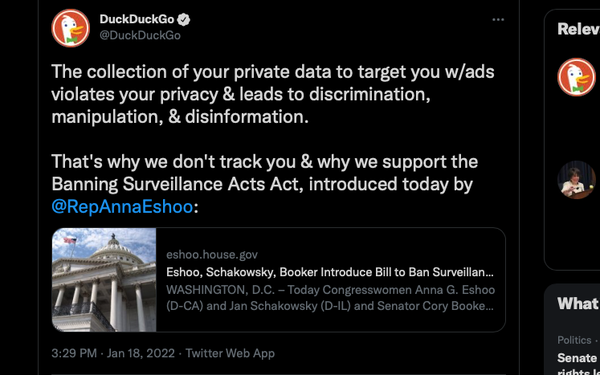 The Banning Surveillance Advertising Act (BSAA) bill was introduced by Democrat lawmakers this week that would prohibit advertisers from targeting ads to consumers, with a couple of exceptions.

Broad, location-based targeting and contextual ads are the exceptions.

The bill would lower the quality of search results and reduce the accuracy of ad targeting. In a blog post, Google said the bill, if passed, would prevent the ability to serve up directions from Google Maps in search results; provide answers to urgent questions; prohibited from highlighting information gathered about hours of operation, contact information, and reviews.

The bill would also hurt small businesses and local retailers, as well as companies using Gmail, Calendar, and Docs if not allowed to integrate or work together -- and customers.

Kent Walker, president of global affairs and chief legal officer at Google, wrote about the challenges on Tuesday published in the post titled The harmful consequences of Congress’s anti-tech bills.

Other industry insiders also say the bill goes too far. “If the sponsors understood the devastating effects this bill would have, not only on the advertising industry, but also on our entire economy, they wouldn’t have introduced it,” stated IAB CEO David Cohen. “Data-driven digital advertising is the heart of online commerce, representing an ever-increasing share of U.S. GDP.  It also drives the increasing diversity of products and services consumers rely on for information, education, entertainment and connectivity.”

“Disinformation, discrimination, voter suppression, privacy abuses,” were cited by California Congresswoman Anna Eshoo, the lead sponsor of the bill, as the reasoning behind the bill.

“The hoarding of people’s personal data not only abuses privacy, but also drives the spread of misinformation, domestic extremism, racial division, and violence,” Booker stated.

Not all were against the bill. Privacy search engine DuckDuckGo tweeted its support.

“The collection of your private data to target you w/ads violates your privacy & leads to discrimination, manipulation, & disinformation,” DuckDuckGo wrote. “That’s why we don’t track you & why we support the Banning Surveillance Acts Act introduced today by @RepAnnaEshoo.”