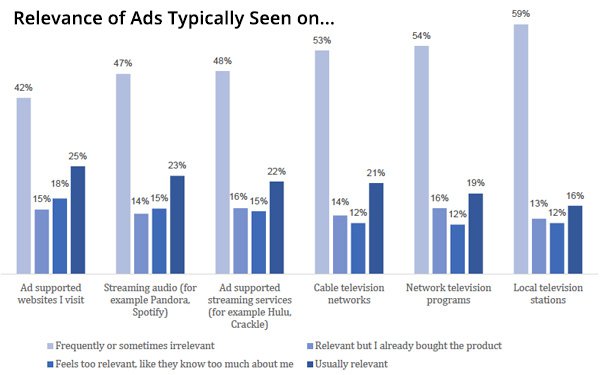 Americans express just as much resistance to being placed in target segments as they do to being targeted individually, according to recent data.

ARF released its fourth annual Privacy Study, surveying 1,280 American consumers from May 14 to May 26, 2021 as Democratic lawmakers began a heated industry discussion after introducing a bill that, if passed, would prohibit many forms of behavioral targeting.

This year, the ARF expanded the section on privacy and personal data use.

With the decline of cookies and device IDs, advertisers have considered targeting small aggregates of de-identified consumer cohorts. This strategy would represent far less risk to personal privacy, but consumers appear to be equally resistant to the use of personal data when it is described as a process of targeting “to groups or segments of people with similar characteristics rather than delivering an ad to an individual person.”

Between 31% and 43% of consumers rejected being included in a target segment defined by probable age and gender to location tracking and online behavior. A majority would accept inclusion in segments if they could opt in, opt out or receive more relevant ads.

Americans above age 55 are more resistant to being assigned to a segment than those ages 25-34. This resistance declines with increasing education and income. Those with no political-party preferences express the greatest resistance to being grouped for targeting purposes.

Despite the industry’s efforts to deliver more precise messaging, less than one-quarter of consumers consider the advertising they receive “usually relevant.”

The data also highlights two other complaints about targeting -- that ads are annoying because they are for products the individual already purchased, or that the ads reflect too much knowledge about the individuals that receive them and are thus “too relevant.”

The ARF also analyzed smartphone use, which the data shows is more widely used for searching and browsing, social networking, emailing and texting, and audio streaming than laptops, desktops or tablets.

The only activity the survey asked about that Americans are more likely to do on laptops and desktops than on smartphones is work/business.