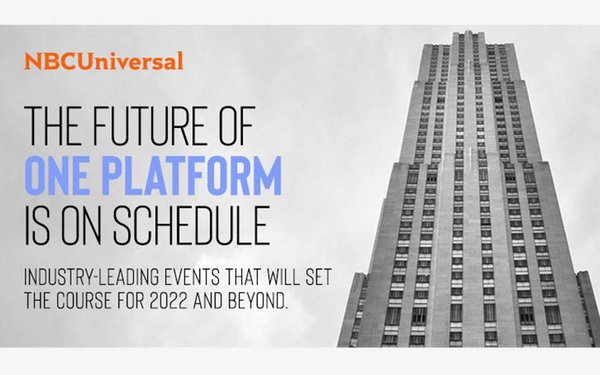 Joining other TV networks, NBC says it will produce four live, in-person upfront-related meetings for advertisers, which will be “interconnected.”

The first event will be scheduled for March 22 in New York City -- a “developer” conference in its Studio 8H room at Rockefeller Center. It will focus on data, measurement and activation, according to an open letter to the industry from Linda Yaccarino, chairman of Global Advertising and Partnerships at NBCUniversal.

Then on April 11, a “content preview” in New York and in Los Angeles will offer audience insights and data science for its content development and creative strategy.

On May 2, for the digitally focused Newfronts meetings, the network will look at the connection between technology and content strategy. Yaccarino says the event will explore new ways to engage audiences -- especially for streaming.

On May 16, NBCU will return to its regular live, in-person event at Radio City Music Hall -- its first since 2019. That night, NBC will have a Telemundo Celebration at the Ziegfeld Theater, which will examine global culture.

All three TV network groups -- as well as many others -- had been doing virtual-only upfront events the last two years due to the COVID-19 pandemic.