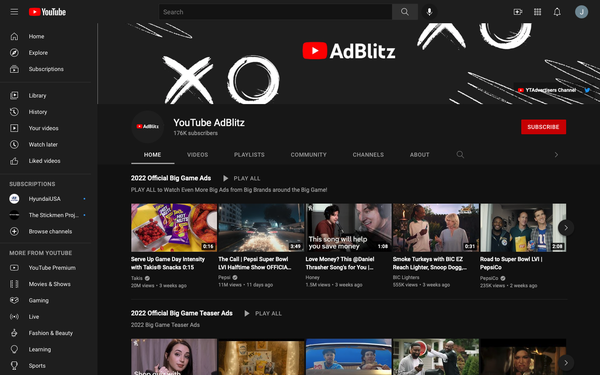 YouTube on Monday kicked off AdBlitz, its digital destination for sports fans to watch their favorite Super Bowl ads.

AdBlitz, in its sixteenth year, is the Super Bowl ads hub. Blake Stuchin, vice president of NFL Digital Media Business Development, believes partnering with YouTube on AdBlitz provides fans with great advertising from the game, including direct access to the NFL spot, teasers and behind-the-scenes content.

And while the destination provides fans with highlights, game recaps, and original series, it also gives advertisers the ability to reach consumers who tune into the game to see the ads, rather than watch the sport, Sadie Thoma, director of U.S. Creative Works, wrote in a blog post.

When excluding those who don't care about sports or don't plan to watch the Big Game, 72% rewatch at least some football commercials before or after the game, according to a Kantar survey.

NBC's top 30-second spot ad inventory for this year’s game, going for a record $6.5 million, are pretty much sold out.

YouTube also highlights ad teasers, which are in this year. Lay’s created two teasers for its Super Bowl LVI commercial, as did Rakuten.

Viewers can go to AdBlitz to watch all of the Big Game ads and check out playlists for the most comedic, dramatic, action-packed, and inspirational spots. There’s also a list of featured AdBlitz partners, including Turbo Tax, Disney Plus, Toyota USA and Lexus.

There’s a shift in how people enjoy content and entertainment. As digital consumption rises to record highs, sports fans turn to YouTube to find their favorite highlight reels, and in-depth game day analysis, especially around the Super Bowl.

NFL Media and YouTube also partnered to bring audiences the “wackiest plays, biggest bloopers, and laugh-out-loud moments” of the season with the comedic highlights, NFL Follies.

Season One is now streaming exclusively on the NFL YouTube channel.

Some of the favorites from last year include Amazon’s spot featuring Michael B. Jordan as Alexa’s body. Tom Brady and Rob Gronkowski showed the importance of a strong network with T-Mobile, the "GOAT in 5G," and Old Spice inspired people to get off of the couch with a ad for its Old Spice Dynasty scent.