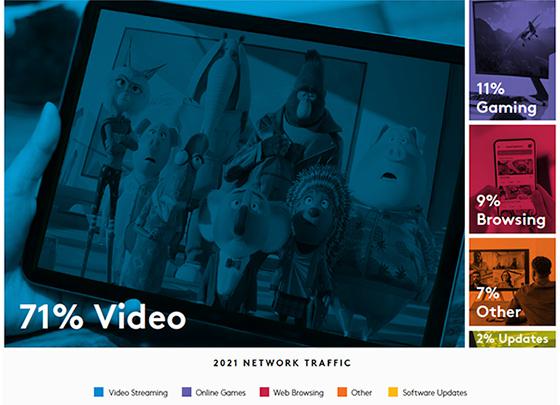 Increased traffic — upstream and downstream — for advertisers means greater opportunities to reach consumers online and as they walk into physical stores.

While Comcast didn’t break out advanced advertising as its own category in the network data report, Elad Nafshi, EVP and chief network officer at Comcast Cable, said “video consumption continues to be far-and-away the largest driver of traffic on our network, and we don’t see that trend changing soon, as people consume more and more video delivered in ever-increasing fidelity and performance.”

Peak internet use times shifted from mid-morning in the beginning of the year to late evening by the end of the year, which reflects pre-pandemic patterns, according to the Comcast data.

Comcast made a $4.2 billion investment to strengthen and expand the company’s network last year, taking totals up to more than $30 billion during the past 10 years. Advances in network technology, including future proofing the network, smart software and virtualization technologies along with key steps toward the next phase of the network, 10G broadband, which companies consumer the network that will power what the company calls the data-driven fourth industrial revolution.