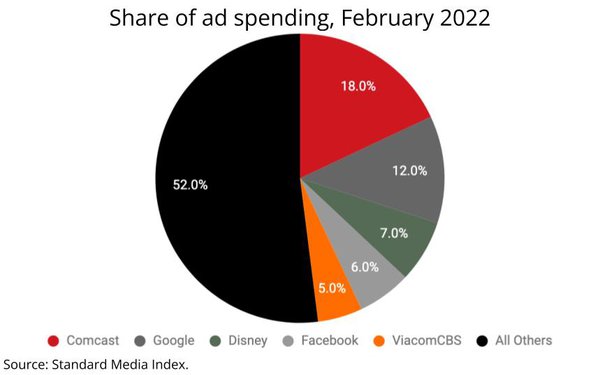 As its NBCUniversal unit heads into this year's "developers conference" today, it likely will have a significant share of the ad industry's mind, thanks to a disproportionate share of its budgets.

With an 18% share of ad agency ad spending in February, NBCU parent Comcast was half again bigger than Madison Avenue's next-biggest supplier -- Google's 12% share -- in February, the most recent month released by Standard Media Index.

"Comcast's ad revenue surged 139% year-over-year, surpassing Google, and moving up to the No. 1 spot," SMI analysts wrote in their analysis of U.S. ad spending for February, and pointing out that the surge was largely due to its coverage of the Super Bowl and The Winter Olympic Games, the latter of which served as a test bed for one of the "alternative currencies" (iSpot's) it is testing with big advertisers as part of its new development process.

iSpot will be one of the big suppliers presenting at the development conference later today, and it presumably will include a review of how its measurement data delivered for advertisers participating in NBCU's Olympics test.

In January, the last normal month of comparison, Comcast ranked second among suppliers with a 10% share of the U.S. ad market, just behind Google's 11% share.

Of course, the biggest source of advertising budgets -- representing more than half of ad spending in every month -- continues to be the long-tail of all other suppliers, following the Big 5 supply chain.