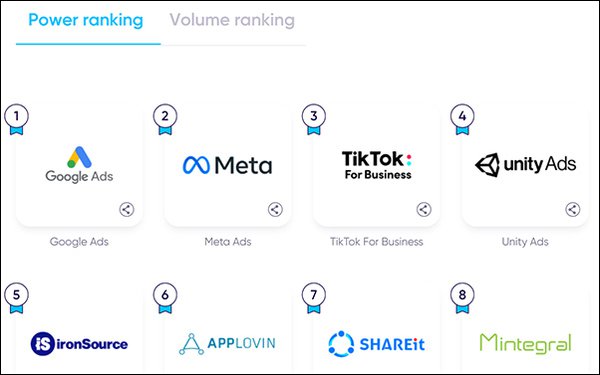 AppsFlyer today released the fourteenth edition of its Performance Index, which covers performance during the second half of 2021 -- ranking the top media sources in mobile advertising.

The report examines and measures the continuing impact of Apple’s App Tracking Transparency (ATT) feature  on the mobile ecosystem -- from iOS and Android, to gaming and non-gaming apps, self-reporting networks (SRNs) and non-SRNs.

Apple’s privacy changes continue to disrupt both app marketers and mobile media companies, with 25% of total budgets shifting from iOS to Android in 2021.

AppsFlyer’s Performance Index analyzed a total of 610 media sources, 25 billion installs, and more than 18,000 apps from July to December 2021. The second release of the SKAN Index spans 240 million postbacks -- an action taken by an interactive webpage -- from more than 1,800 apps and 32 media sources.

The SKAdNetwork (SKAN) is a privacy-centric API operated by Apple, which aims to help ad networks and advertisers measure their advertising activity, including impressions, clicks, and app installs in aggregate.

Meta ads captured the No.1 position in this SKAN Index for in-app purchases, non-gaming in all categories. Twitter Followed at No. 2. Google ranked No. 3. Snapchat and TikTok for Business rounded out the top five.

In terms of volume ranking, Google Ads remained at No. 1, but Meta Ads moved up to No. 2 and Unity Ads dropped to No. 3.

“It appears that Meta’s internal modeling for SKAN has improved, driving better results for advertisers on the platform, leading it all the way to the top of the SKAN rankings in edition 14,” according to the AppsFlyer report. “It’s important to note that volumes in SKAN are still nowhere near pre-ATT numbers (in Meta as well as other networks), which is one of the reasons why Meta — and mainly its Facebook app — is challenged by ATT as stated in its latest earnings call. “

Meta ads across its social platform managed to drive better results compared with all other media sources, while its quality signals were best across in-app engagement for non-gaming apps, as well as in-app purchases (IAP) for both gaming and non-gaming, according to the report.

Placing first in the SKAN Index indicates that Meta’s internal modeling for SKAN continue to improve, driving better results for advertisers on its platforms, but in the new reality, its index volume remains much lower than pre-ATT days. The volume coming from consenting iOS users cannot compensate, since most users do not consent to tracking.