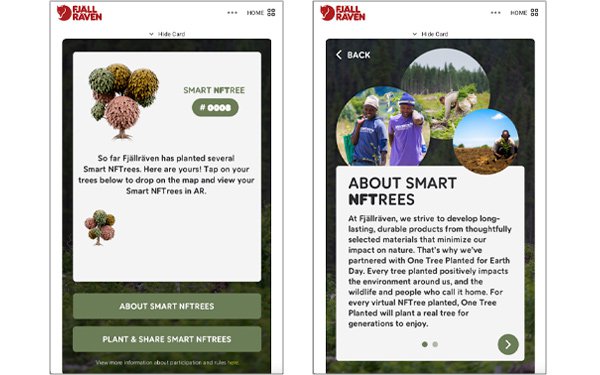 Partnering with Web3 marketing company SmartMedia Technologies (SMT) and a reforestation nonprofit called OneTreePlanted, Fjällräven says it will provide buyers with a tree to plant both in reality and in the metaverse.

The Smart NFTree is a geo-aware, 3D virtual tree that can be planted in any Web3 environment and admired in augmented reality (AR), per a recent statement.

By utilizing SMT’s technology –– the “NFT brain framework” – –each tree will grow at a unique rate based on how many times users share and engage with an owner’s social posts tagged as #SmartNFTreeSpring.

After purchasing an NFTree, owners are able to collect, view, and interact with their purchase via a Smart Web3 NFT wallet available on any device or operating system.

“SMT has built its business on a green platform, and NFTrees serve as a great tool to involve environmentally conscious consumers who want to engage with NFTs and in Web3 environments,” says Tyler Moebius, CEO of SmartMedia Technologies.

For their project to remain environmentally friendly, SMT and Fjällräven will match every NFTree sold with a real tree planted through OneTreePlanted.

Each Smart NFTree is minted to the Enterprise BlockV Mainnet, a public and permissioned carbon-neutral blockchain that uses renewable resources to mint NFTs. While the algorithm operates through servers that run on 93% renewable energy, the remaining 7% is offset by carbon credits, thus making the total minting process carbon-negative.

“With NFTrees, we can engage and educate users that may not actively seek nature in their daily lives,” says Steve Stout, senior director of Global Direct to User at Fjällräven.

Consumers can acquire NFTrees from a QR code via a TV ad, billboard or social post. Once acquired, Fjällräven will airdrop their Smart NFTrees into retail stores to be picked up in a virtual scavenger hunt, allowing users to engage with their Smart NFTrees for coupons, prizes, or flowers that blossom from the tree.

Business Insider reported in March that the cryptocurrency industry is planning to reduce 100% of its carbon emissions by 2030, but they also stated that just the 35% of Bitcoin mining done in the U.S. creates an estimated 40 billion tons of carbon dioxide.

Bike Club NFT, for example, began as a collection of cycling avatar pictures launched by Australian professional cyclist Jack Haig. Because it used Ethereum, the project received so much backlash that Haig was forced to rethink its Web3 ambitions.

Now, Bike Club is mainly just a Discord community of cyclists, with future NFT plans on the way.

Other outdoorsy Web3 attempts have been more thoughtful to which blockchains they tie themselves to, including Outside Interactive’s new adventure and wellness-centric “Outerverse” which runs on the low-energy proof-of-stake blockchain Solana.