All The Hacks Fit For Us To Print: A Conversation With Media Lions Jury Chief Daryl Lee 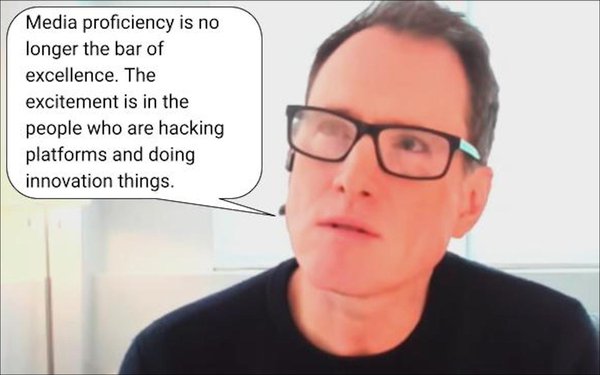 Heading into next week’s Cannes Lions advertising festival, MediaPost checked in with Media Lions jury president – and IPG Mediabrands global CEO – Daryl Lee to see how the still somewhat hybrid judging process has been going, and what patterns and themes the judges have been finding. With the Media Lions shortlist expected to be announced any moment now, Lee spoke via Zoom with MediaPost Editor-in-Chief Joe Mandese on his own personal impressions, and what they portend for the direction of media creativity and innovation.

MediaPost: Thanks for taking time to brief us in advance of the the awards. How is the process working this year? Are you doing that physically in Cannes?

Daryl Lee: We are post-pandemic, but it's all virtual. I think I've got 214 entries. And that's just Round One. We’ll narrow that down and confirm a shortlist based on all of the awards judging.

MediaPost: Is that a higher volume than normal at this point?

Lee: It feels like it. Overall, my sense is that this is like a Cannes on steroids. I think there’s a lot of entries this year and pent-up demand. They’re really good entries. And they’re quality entries.

MediaPost: Are you seeing any themes or patterns among the media entries that are beginning to shape your thinking at this point?

Lee: We had this conversation as a jury a couple of days ago -- which is that in the past, we thought the highest level of media excellence and creativity was, can you weave together an integrated story and tell an end-to-end experience where a creative idea and a media platform weaved together to create an amazing customer journey? And that is still a mark of of media proficiency, but it's no longer the bar of excellence.

What we're looking for in terms of excellence is innovation on top of that. Are you doing something that extends or disrupts the platform in new ways? Are you linking media together in a surprising way? Are you creating media? I think you're going to definitely see from us, as a jury, a higher premium on innovation than integration.

I’m seeing this from some of the entries where you get what used to be called “360,” and is now called “end-to-end customer journey.”

Those entires are very well-written and very well put together and quite unexciting. That’s because the excitement is in the people who are hacking platforms and doing innovation things.

MediaPost: Are you going to have a tough final deliberation process based on the amount of innovation you’ve seen?

Lee: I think choosing “The One” is going to be hard, because there’s so many different flavors of innovation that we’re seeing. And there’s also this other dimension, which is as powerful in the entries we’ve seen, which is “media for good.” That is the angle where we are going to have to make tough decisions around who gets gold and who gets recognized as being the best.

And that is a big theme in what we are seeing. And not just around Ukraine, although there is a lot of Ukraine stuff. In general, it’s gender equality, racial justice, climate action, sustainability, reducing pollution. It’s a lot of brands that are talking authentically about a purposeful issue that is really connected to them and their consumer in a credible way.

I think that will be another dimension that makes the final judging tough for us. How do you choose between a really great climate change-oriented media innovation versus one that’s around racial justice or Ukraine?

MediaPost: Well, we were blown away by the volume and quality of that at last year’s Cannes, but the world hasn’t gotten any easier and there are even more complex issues this year. Do you feel like social issues are vying with other social issues in the hearts and minds of the judges? And if so, does that lower the opportunity for more straightforward brand marketing and media communications?

Lee: No, because I think the jury we have is quite clear that we need to reward work that brands are doing that is credible to them in terms of their sales and business objectives, too. As long as that’s the filter, then it isn’t about the issue, it’s about the brand.

The Cannes team does a great job of reminding us about that. We can recognize as a gold, or a silver or a bronze media lion any work from anything. It can be a nonprofit or a for profit brand. But we can’t give the Grand Prix to a nonprofit brand. That goes into the Lion For Good category.

But I do think it will be about this strong brand that has done this amazing thing with this platform and this issue has been the context -- rightfully so. I mean, there have been a couple of amazing innovations where I just don’t see the connection to the brand at all. And that will not get recognized. Because it might have been an amazing innovation and a cool idea, but it doesn’t fit.

Lee: Let me be clear -- it’s brands using media and media hacks as a service for their audience. And I can’t cite the examples now, but hypothetically, what you see in the gaming world and in streaming is that all these streamers use music and song as the background for their streaming shows. And there are brands thinking about, how do you hack into Twitch? How do you hack into live streaming and give people access to cool music they can use, which is, I think, brilliant.

And if the brand has a place in people’s lives as an entertainment brand, or as a brand that would fit into the lives of a gamer, there are amazing examples of a brand using a Discord server to hack into Twitch. And that’s the media providing a service for the brand, which is cool.

MediaPost: Have you seen many examples of creating new media?

Lee: Some. Some in the ambient space. We all say “everything communicates” and often we forget how important product is in the communication, including product packaging. And I’ve seen some very interesting stuff using new ways of using product packaging to speak to a consumer, and in particular, a brand point of view, which I think is super interesting.

But I haven’t seen anything that strikes me as an entirely new medium. Unless you consider the “creator economy” the media. The branded content category was the biggest category I judged in my judging just in terms of sheer entries. It just didn’t end. And that is the category I think will be the biggest category within the Media Lions. And it’s a sign that the media networks of today are – not the high-end influencers and celebrities – but this giant creator economy, which has been built by people who have created themselves as independent media networks in order to work with brands. And that is super interesting.

MediaPost: Have you seen much that is overwrought, gimmicky or played out, like a super amount of NFT integrations?

Not so many NFTs. It’s mostly the metaverse and then “breaking the internet.” I had to send a note out to people saying, “Do not disqualify them if they say they broke the internet.” But we don't believe it.

MediaPost: On a personal note, what are you looking forward to getting the most out of experiencing the first fully live Cannes in a while?

Lee: In terms of the judging process, I’m a global person who has lived on three continents, but my view is very American. And I really have enjoyed the judging, because I realize how American I am and how global our industry truly is. There’s some great work coming out of the rest of the world. LatAm is on fire. Brazil, of course, always. We’re seeing amazing stuff from India, from China, Australia, South Africa, across Africa, Belgium and a lot from Eastern Europe, which I think is a reaction to how bad things are -- and that people’s creativity actually helps them take control and shape things.

I’m personally finding it very rewarding to see how truly global media creativity is, which is the promise of Cannes.

And personally, in terms of the festival, I’m curious how we as a community react to the fact that there’s still a grinding, painful war happening so close. And do we, as a community, have the fortitude and integrity to acknowledge that we’re going to have to keep supporting and fighting for what the Ukrainians are fighting for.

And how do we do that without making it doom and gloom, and moments of silence and anything trite? But I do think it will be important, because we do have this power of amazing global creativity. All these brands want to do good in the world with media that has had so much challenge.

I don’t think I’ve been in a time in my career where it has been more morally fraught and where you have to really think about, “Do I do good by helping spend clients money on this place versus that place." We have that sensibility and consciousness now and what do we do with it. I’m excited to see what we do at Cannes about that. 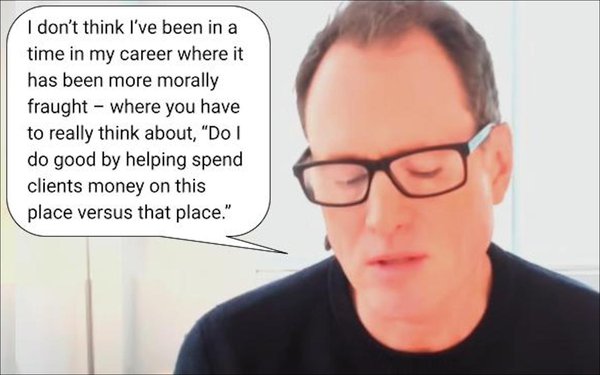