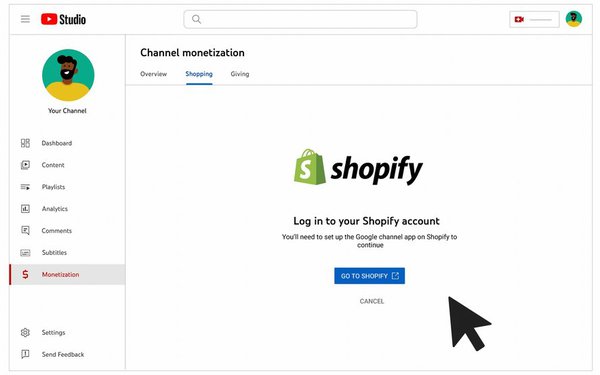 YouTube on Tuesday introduced a partnership with Shopify that gives all eligible creators access to live shopping tools, such as the ability to link storefronts and sell products directly on the platform.

Creators who link their stores can display products across their channel to take advantage of Shopify’s real-time inventory syncing to prevent out-of-stock items. Creators in the United States also can enable onsite checkout, so viewers can complete their purchases without leaving YouTube.

The move follows Google’s relationship with Shopify, which it expanded last year, enabling merchants to make their products discoverable to more consumers across Search, Shopping, Images, Maps and YouTube.

YouTube explained in a blog post published today that its partnership with Shopify will allow creators to display products throughout their channels, like below videos, during livestreams, or at the end of videos. Inventory will sync with Shopify so viewers can see in real time if something is out of stock. YouTube will also give US-based creators the option to enable on-site checkout, meaning viewers can purchase products directly on the platform without leaving YouTube.

“We know that creators and viewers have a unique relationship and it’s this trust between them that helps inform what viewers ultimately buy,” David Katz, vice president of shopping products at YouTube, wrote in a post. “In fact, according to a study we ran in partnership with Publicis and TalkShoppe, 89% of viewers agree that YouTube creators give recommendations they can trust.”

The YouTube partnership seems as an extension to a growing relationship between Google and Shopify. In January, Google announced Shopify, WooCommerce, BigCommerce and other ecommerce partners would support Performance Max. It meant merchants could upgrade their Smart Shopping and Local campaigns through the Google Ads API later in 2022.

Starting next week, YouTube will introduce a shopping destination in the explore tab featuring shoppable relevant content for viewers in the U.S., Brazil and India, with additional countries to follow later this year.