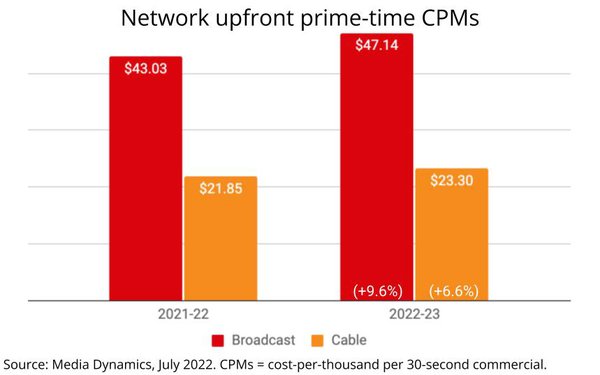 The 2022-23 prime-time TV upfront marketplace, including broadcast and cable TV networks, posted “modest” gains -- up 5.8% to $20.1 billion, according to estimates released by Media Dynamics Monday.

While broadcast and cable networks grew similarly in volume -- up 6.4% (to $9.9 billion) and 5.2% (to $10.2 billion), respectively -- broadcast  showed strength when it comes to prime-time 30-second commercials in terms of the cost-per-thousand (CPM) viewers.

“[There was] a definite softness in cable sales relative to broadcast, as many buyers felt that they were better off diverting fairly large sums to streaming venues -- despite their higher CPMs -- as a hedge against future scatter market pricing for broadcast prime,” says Ed Papazian, president of Media Dynamics.

Overall, he adds, these gains "were well below last year's spectacular hikes due to buyer concerns about the looming threat of an economic recession."

A year ago, big broadcast TV networks in the upfront market for the 2021-2022 season took in an average 19% gain in prime-time broadcast CPMs, and 10% higher for cable TV networks, according to Media Dynamics.

This year is different. He says: “Linear TV sellers were willing to trade off smaller CPM increases for their linear TV platforms in exchange for increases—often at higher CPMs—for their streaming services.”