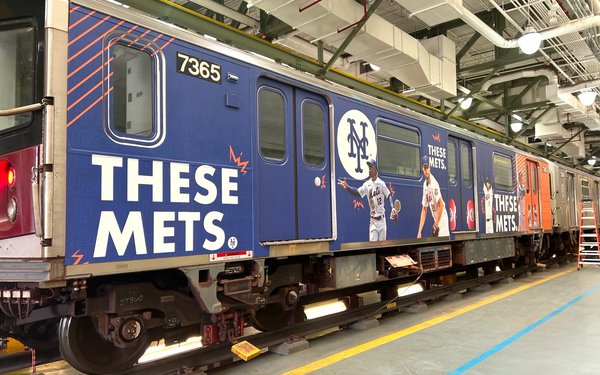 It's not exactly a subway series -- yet -- but following their second most-winning season, the New York Mets will have a new branding campaign that is omnipresent in New York City's subway system, as well as other out-of-home and social media.

The new campaign, which will run over the next few weeks, utilizes the "These Mets" tagline created by creative agency FCB New York with media done by Giant Spoon.

“Nothing says New York City in the fall quite like October baseball,” New York City Transit President Richard Davey states, adding, “With the Mets back in the playoffs and sell-out crowds expected at Citi Field, mass transit is the home run option to root for the Mets as they chase a World Series Championship. There’s no better way than taking the subway to watch the playoffs – it’s Amazin’!”
The details of the branded wrap include:
agency, baseball, brand marketing, campaigns, new york, out-of-home, social media, transportation
Next story loading