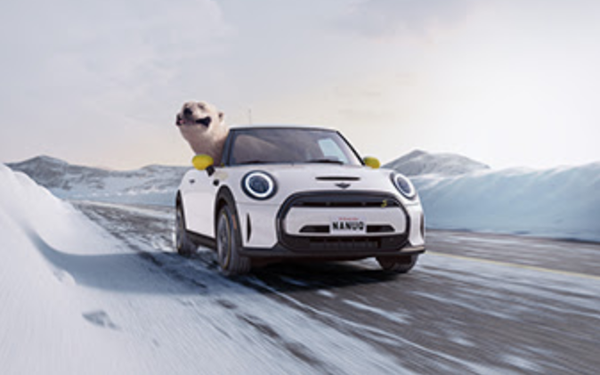 Mini USA is offering its new electric vehicle in a color influenced by fans of the automaker.

A campaign for the new 2023 Mini Cooper Electric SE from the brand’s creative agency Pereira O’Dell kicked off on Earth Day in April starring a polar bear character in the passenger’s seat.

The polar bear went viral, leading to a huge outpouring of love from the brand’s owner base and fans. The automaker invited customers to give the bear a name and the result was Nanuq, which means polar bear in Inuit.

The name and the bear’s color resulted in a brand new paint color for the Mini Electric, a first for the automaker, says Rah Mahtani, brand communications manager, at Mini USA, which is an independent brand of the BMW Group.

“There have been instances in the past where customer feedback has helped influence our product offering, including the return of certain paint choices,” Mahtani tells Marketing Daily. “This is, however, the first time customer feedback influenced the name of a color in our palette.”

The automaker has always embraced customer feedback in its product offerings, he adds.

“It is not only important for us to try to predict what our customers will want in the future but also to interpret their feedback and insights and apply them directly to our product planning,” Mahtani says.

To extend the effort, the automaker also is partnering with Polar Bears International to convert the enthusiastic reaction toward the campaign into a chance to help real polar bears through an Eco-Adoption page. The partnership aims to promote awareness of the NGO’s polar bear conservation efforts.

A case study video was created by Pereira O’Dell to highlight the creative journey from initial campaign to fan engagement that led to the name of both the polar bear mascot and the new paint color.

“This was supposed to be a story about a car that is good for the environment and super fun to drive.” said PJ Pereira, creative chairman at Pereira O’Dell, in a release. “Maybe about the charm of this not-so-little mascot too. But then it snowballed into an even better story about enthusiasm, passion and creativity of the Mini community."