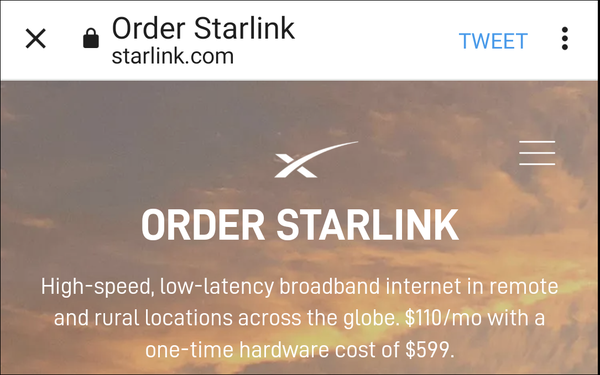 Elon Musk's SpaceX has purchased an advertising package on Twitter for its satellite internet service Starlink, as major brands like General Motors and fashion icon Balenciaga pause advertising campaigns on the social platform.

The company reportedly spent $250,000 on the ad campaign to promote Starlink services in Australia and Spain on Twitter.

The campaign will promote Starlink by placing SpaceX’s ad on top of the main Twitter timeline for a full day, according to one report.

Users in Australia and Spain will see a SpaceX Starlink ad the first three times they open Twitter when the ad campaign is scheduled.

Twitter -- which reported that more than 90% of its revenue came from ad sales in the quarter ended June 30 -- has seen an exodus of advertisers fearing changes to content moderation rules and more since Twitter CEO Elon Musk acquired the company. Most campaigns on the platform support branding and performance.

Employees who have left the company include former Twitter CMO Leslie Berland, and Twitter Former Head Of Trust & Safety Yoel Roth, among others. General Mills, Mondelez International and Volkswagen AG have also paused advertising on the platform.

It appears that Musk wants to demonstrate advertising on Twitter still works.

On Sunday, Twitter CEO Elon Musk also announced that companies will soon roll out the ability for accounts to identify which other Twitter accounts are associated with them. Companies can manage affiliations with each other similar to the way clean rooms for advertisers might work when sharing data for ad targeting.