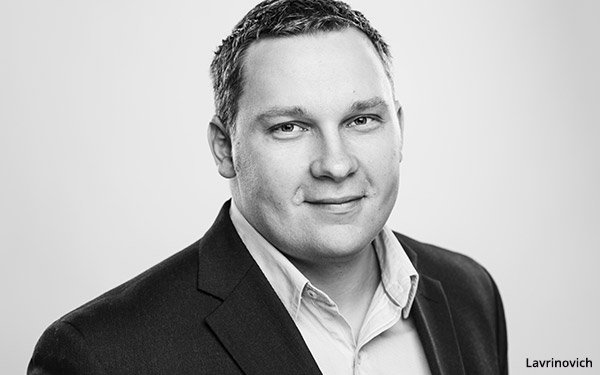 Lavrinovich comes to Cooler Screens from Amazon, where he supported the company for over four years in several roles including global head of data science.

In his new role, Lavrinovich will lead data and product strategy for Cooler Screens, pairing in-store data with innovation to unlock new opportunities for brands and retailers.

“You know how some activities make you lose your sense of time because you are completely consumed and obsessed by them?," Lavrinovich said, when asked what attracted him to data. “For me, to this day, it is understanding and analyzing the world via data patterns, particularly understanding human behavior.”

He described spending hours at a time digging through code and data in a search of an “aha” insight and a story it will reveal, not realizing how much time has gone by. He compared it to “intensely interesting conversation,” where someone asks a question of data, but must be curious and creative to structure the questions and interpret the answers.

Lavrinovich’s experience with data began during his university years. “I always liked and excelled in math and fell in love with probability theory and statistics during my undergrad studies, and subsequently completed a MS degree in statistics,” he said. “I felt like statistical methods were a form of a superpower for me, empowering me to glean insights and patterns from the data that would otherwise have been hidden.”

In math, he said, the person tends to deal with precise answers and equation questions. With statistics and probability, the focus is on embracing the ambiguity and complexity that comes with real-world scenarios in a more pragmatic and less theoretical way while leveraging a mathematical foundation.

“That naturally appealed to me. I was also attracted to statistics due to its practical applications in virtually any field such as computer science, machine learning, biology, politics, marketing, insurance, and others,” he said.

His first exposure to very large volumes of data and the possibilities that it brings came during the years spent at dunnhumby. One of the primary sources of data he focused on in the early years was the data collected through loyalty cards in grocery stores.

“It still amazes me how much you can understand and learn about human behavior, preferences, and patterns though data related to customer shopping behaviors,” he said.

For more than 15 years, Lavrinovich led global change for top companies in the retail, ecommerce and consumer products space.

He also previously served as senior vice president and head of solutions for Dunnhumby in North America, where he spent more than 12 years with the company, developing advanced, data-driven solutions in customer insight and strategy, pricing, promotions, assortment, and marketing for leading retail customers including Kroger, Best Buy, and Macy’s.

An unnamed leading brand in the vitamin and nutritional supplements space is one of the first customers to use its New Product Launch solution for CPGs. In an initial campaign for a new product, the brand realized a 24.7 percentage point sales lift via the new offering.
advertising, amazon, audience measurement, cpg, data, machine learning, retail, search
Next story loading