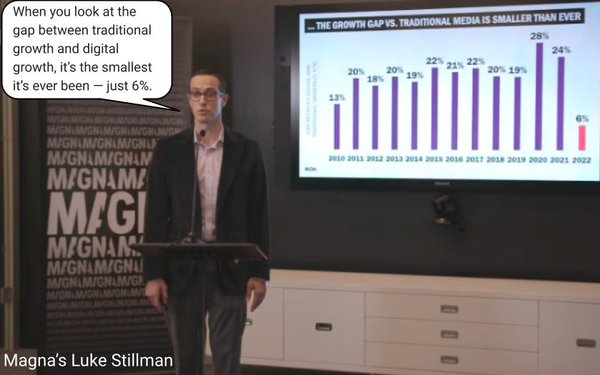 If there is a positive story in the ad-spending downgrades being issued this week by the major agency forecasting units, it's that ad budgets are becoming far less concentrated among the big digital platforms and the biggest beneficiaries are smaller digital publishers and -- surprise -- traditional media.

At least that was one of my takeaways based on IPG Mediabrands Magna's year-end outlook, which was the first of the Big 3 forecasters to release its new data late Sunday.

GroupM and Zenith will do so Monday morning, as part of the annual kickoff at UBS' media week conference in New York City, so look for that coverage elsewhere on MediaPost, but for now, I'd like you to think about the implications behind Magna's view that -- after years of concentrating among Google, Meta, etc. -- the advertising marketplace appears to be diversifying once again.

According to Magna's analysis, the top 15 media suppliers' share of the global ad marketplace actually contracted two percentage points in 2022 to 58%.

Now that might not seem like a lot, but when you consider we're talking about hundreds of billions of dollars, it's not chopped liver, "it's good news for small publishers," says Magna's Luke Stillman, adding: "The concentration of the ad market paused for the first time in 2022."

Much of Big Digital's slowdown came from a precipitous deceleration of ad spending on big social media networks due to a combination of a "more competitive environment" and "data headwinds," he noted, but the real story is that after years of consolidating among a handful of big powerful walled gardens, advertising budgets are once again diversify across media, and not just digital.

Following a dozen years in which digital media ad spending expanded at double-digit rates faster than traditional, Stillman notes the gap is just 6% this year.

Magna did not elaborate on explicitly which smaller publishers are benefiting from the market share shift, but I'm going to guess that two positive commitments made by big advertisers and agencies in the past couple of years -- the creation of so-called "equity marketplaces" to move ad budgets into publishers serving Black, Hispanic, Asian and LGBTQ+ audiences, as well as a pledge to shift money from the most toxic social media platforms promoting misinformation back into quality journalism -- may actually be having an impact.

At least I hope so. 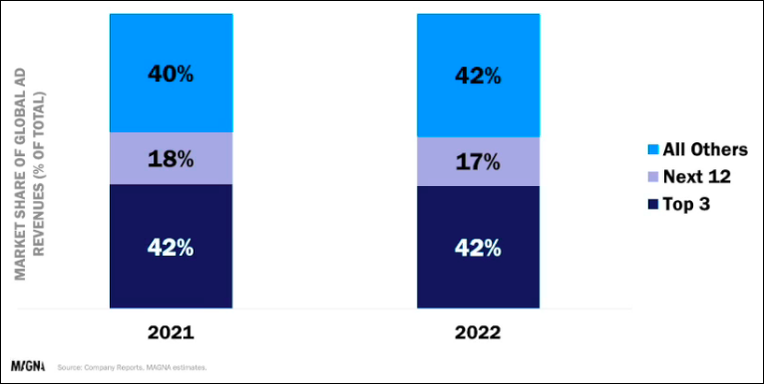