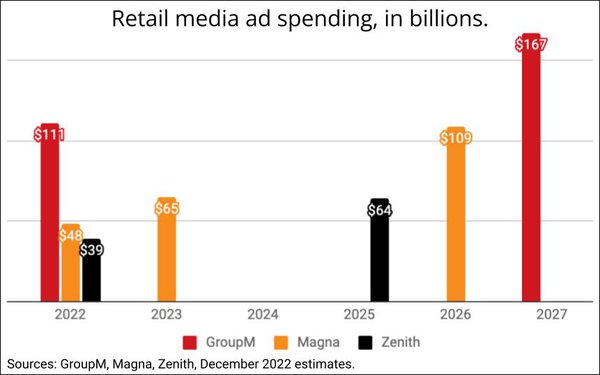 "[Retail media] has likely been a beneficiary of shifts in offline to online retail advertising as well as budget from other media owners to retail media networks," GroupM notes in the just-released year-end edition of its "This Year Next Year" forecast, adding: "But shifts alone are likely not enough to explain the growth of this medium, where we see two sources of current and future incremental growth within individual markets: spending from overseas merchants, notably China, and new, non-retail-endemic advertisers adding retail media either through direct buys or via existing programmatic vendors as an audience buy."

Magna, meanwhile, benchmarks retail media ad spending at $48 billion this year and projects it will more than double that volume in the next four years.

At $39 billion, Zenith has the lowest estimate for retail media ad spending this year -- but projects similar rates of growth, estimating it will rise to $64 billion in the next three years.

"Notably, the newer platform of retail media, which consists of display and search advertising on e-commerce sites and/or the online sites of traditional retailers, will also drive significant growth as retailers increasingly focus on retail advertising solutions," Zenith says in its new forecast, adding: "Outside of China, where retail media is already prevalent, retail media is expected to grow from $39.2 billion in 2022 to $64.2 billion in 2025, representing a CAGR of 17.8% over the period."