A Third Of Brands Expect To Return To Linear TV Platforms In Q1, Study Finds 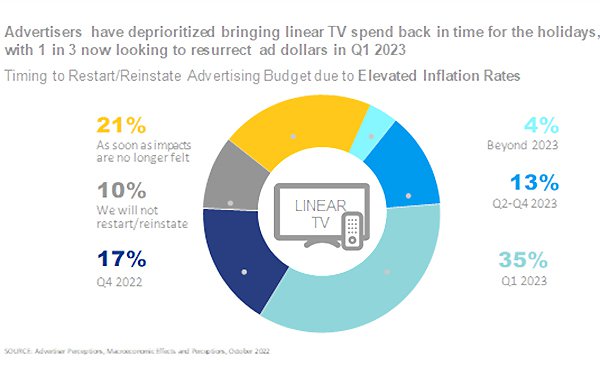 Amidst ongoing weakness in the third- and fourth-quarter national TV advertising markets, 35% of linear TV brand advertisers expect to return to linear TV in the first quarter next year, according to a survey from Advertiser Perceptions.

At the same time, another 31% say they don't anticipate resuming linear TV spending any time soon.

According to the survey authors of the advertising/marketing research business, there is hesitancy -- with measurement.

“Linear TV reductions have been benchmarked by lack of effectiveness, expensiveness and an overall need to reduce budgets."

They add this: “Linear TV advertisers’ lack of satisfaction with cross-platform measurement may also play a role... advertisers largely agreed that audience measurement and cross screen measurement need to be improved.”

Looking back a few months, the belief among many brands was that the soft market would be short-lived. In the third quarter, Advertiser Perceptions said three in 10 U.S. linear TV advertisers who reduced or paused their TV ad budgets said they would resume TV ad spending this year.

In late October, those marketers were still cutting back on TV advertising. And uncertainty remains in the market.

Another 21% says they would resume their linear TV spending “as soon as impacts are no longer felt,” while 10% said: “We will not restart/resinstate.”

Another 13% fall somewhere in between -- saying they would restate advertising on linear TV networks later in 2023 and would resume spending n the second, third or fourth quarter.

The survey was done from 300 interviews fielded from October 3-10, with a prior wave fielded from July 26-August 3. One hundred percent of those marketer/media agency interviewees are involved in brand media decisions, marketers with an ad spend of over $1 million or more over the past 12-month period.