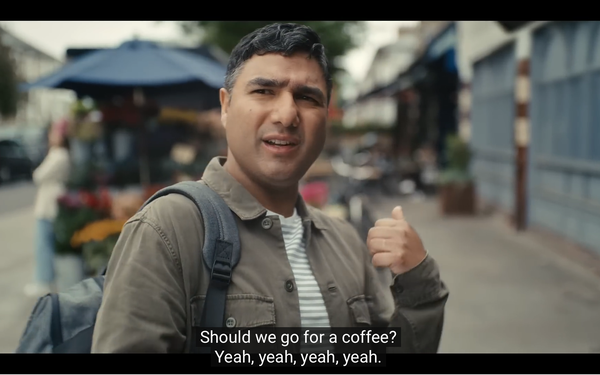 Apple has tapped Nick Mohammed from the famed Ted Lasso Apple TV+ series to highlight built-in privacy features of the iPhone. The short -- A Day in the Life of an Average Person’s Data -- debuted Tuesday just days prior to January 28, 2023, which is Data Privacy Day.

The message about privacy and security is real, but the comedy -- and the message behind the spot -- emphasizes Mohammed’s desire to be recognized as a Hollywood celebrity while keeping his personal information private.

The short opens with the narrator in the actor’s London flat, and says: “Everyday people go about their daily lives unaware their data is harvested and used to track them. But now they have a choice. … In an iPhone, privacy is built in from the beginning. And to illustrate that point, we’re going to take a look at a day in the life of an average person’s data.”

“Whoah! Wow, sorry. What do you mean by average?” Mohammed said. “Sorry, can I just check how tied to that concept are we? … Well, join me, Nick Mohammed, as he embarks on a very ‘average’ day, going to a really ‘average’ film set, to do some very ‘average’ filming.”

Each section in the short provides a tutorial on how to make changes to privacy settings in the phone.

At the end, Mohammed is finally recognized at a restaurant. He looks into the camera and says “I can’t go anywhere these days.”

The ad is part of Apple’s marketing push to promote its privacy features. January 28, 2023, is Data Privacy Day, to raise awareness about privacy issues and to offer tips and information. On that day, a free 30-minute session called Taking Charge of Your Privacy on iPhone becomes available at all Apple Store locations worldwide.

Ted Lasso, Season 3 of "Ted Lasso" is scheduled to premiere in spring 2023 on Apple TV+.