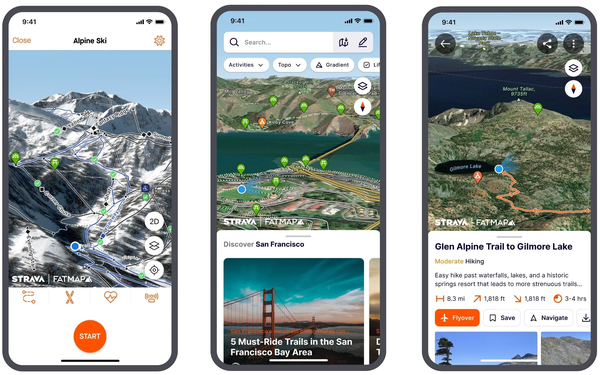 Strava, an activity tracking social platform used by over 100 million walkers, hikers, runners and mountain bikers, has announced the acquisition of Fatmap, a high-resolution 3D mapping platform focused on outdoor terrain, including summits, rivers, passes and paths across the globe.

While Strava and Fatmap will remain separate platforms at present, Strava says it has the long-term goal of integrating Fatmap’s platform (used by 1.6 million people) into its app.

To prepare, Strava is currently devising a single sign-on (SSO) that would allow subscribers to access Fatmap’s offerings by signing into the Fatmapp app with their Strava username and password.

The first integration attempts of Fatmap into Strava are planned to become available to free and paid-for Strava users in the middle of 2023.

“Where other map platforms have been designed for navigating streets and cities, Fatmap built a map designed specifically to help people explore the outdoors,” CEO and co-founder Michael Horvath told TechCrunch in a Q&A. “We will enable Fatmap technology in all of Strava’s services, empowering anyone to discover and plan an outdoor experience with curated local guides, points of interest and safety information.”

Both platforms currently have premium subscription models. Fatmap’s subscription is $30 per year and allows subscribers to unlock access to extra features like downloadable maps and route planning in the mobile app.

Strava’s new paid-subscription model was introduced at the start of this month, marking the first price increase in over a decade.

The rollout received mixed reactions due to some confusion over the price. The new price for subscribers depends on a number of factors, including the region they live in, whether they are monthly or annual subscribers, and whether they purchased their subscription prior to November 23, 2022.

Strava is a leading outdoor fitness app that has raised over $150 million in funding since its start, attracting investors such as Sequoia Capital.