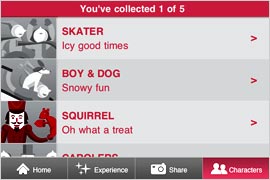 Truth be told: my coffee drinking is legendary. In the mornings when I speed-drink the wake-up mug to the OMMA shows where the coffee urn is conveniently situated right where this emcee can grab it quickly without veering far from the hand mike, I am devoted to the glorious bean. If I get to 9 a.m. without a few hundred milligrams of caffeine in the bloodstream, I may start hallucinating.But now Starbucks is letting visions of sugarplum fairies dance before my eyes even while I am downing my high-test fuel.

The iconic brand has been a leader in mobile marketing for years. Its mobile ad campaigns, couponing and apps have been exemplary. Earlier this year it pioneered retail m-commerce with a virtual gift card that worked as seamlessly at checkout from Day One as I have seen. And if you log on to the free WiFi at any Starbucks, your mobile phone taps into one of the most ambitious brand-hosted content networks around.

Now they are going all AR on us. In a new promotion for the holiday season, the Starbucks Cup Magic app will interact with the red drink cups depicting different winter scenes to render AR goodies. In the one I tried, aiming the app at a cartoon rendering of a toy soldier turns the wooden figure into an evergreen tree with a squirrel bouncing about its branches. Better still, you can tap the critter to make it move around. A throwaway trifle? Sure. But this is one AR experience that at least fits the use case. You are sitting in a Starbucks or back at the office enjoying the drink, and the AR implementation is a nice bit of entertainment.

The program is smarter than most, in that it turns the AR function from curio into a loyalty program. The dedicated iOS app keeps track of the different images you have interacted with and will reward you with something or other if you collect all eight. There is of course a sharing mechanism for sending an e-card to friends with the AR image. You can also send a customized gift card to someone else with any dollar value, although this piece of the app is not sufficiently explained.

Starbucks may suffer a bit from branded app clutter. This is one of three apps available from the brand in the iOS store. There is the master app that allows mobile payment, a mobile card app that tries to push the user over to the master app to use instead, and now a specialized holiday app with AR function.

I imagine there must be some internal discussions among the more mobilized retailers about whether to add new features to a single branded app in these special promotions or spin off a dedicated app. Cleaving new technologies onto an existing app may be challenging and forces everyone to upgrade for a feature many may not want. On the other hand, you require your devotees to carry more than one app and wish that one would handle all tasks. This is a good problem to have, of course, but one that leading brands will have to manage in the future.