Target, Walmart Get Digital For BTS 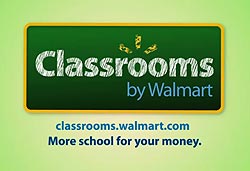 Discounters are upping their digital game this school year, with both Walmart and Target making it easier for shoppers to do more of the season’s heavy lifting online.

Walmart says it has launched a microsite called classrooms.walmart.com, which compiles thousands of classroom supply lists, with schools in all 50 states participating. The Bentonville, Ark.-based retailer says it is the first major retailer to digitize supply lists, which allow shoppers to buy items either online or at their local store. (Local school supply lists will also be available in Walmart stores, it says.)

And at Target, a site called Target.com/college and the Target mobile app will direct shoppers to a new feature called uStyler, which allows kids to mix and match dorm looks, and then share via social media. It has also introduced a sweepstakes called the Target Stuff Scholarship, where one lucky winner gets “a one-year supply of Ramen, a one-year supply of makeup and enough flip flops to outfit the entire dorm floor.” To enter, ramen-lovers complete a video interview and post it on their social media pages. A panel of judges will look at the five entries that generate the most votes, and select the final winner.

Target also has list features, which can be printed at in-store kiosks, promotions, and coupons. And of course, the Minneapolis-based chain is continuing its after-hours bussing program, now in its 11th year, private shopping events for incoming freshman at 69 colleges and universities across the country.

The chain is also offering an additional 5% off online orders using the REDCard, as well as free shipping.

For stores, back-to-school kicks off the important fourth quarter, and is the second-most-important sales event of the year, after the winter holidays. But Walmart says that for parents, it may even be more symbolic, with 76% of the moms it surveyed regarding it as more of a fresh start than January 1. Nine out of 10 even make school-year resolutions, it reports, with 78% vowing they will be more organized this school year, 75% hoping to save more money, and 61% making healthy eating a higher priority.