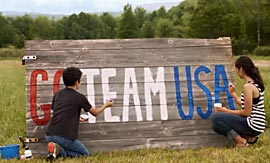 First-time Olympics sponsor Chobani is celebrating the spirit and determination of its own team, as well as Team USA, in its multimillion-dollar integrated campaign for the 2012 games.

“Proudly With You,” from Leo Burnett New York, tells the story of how the cooperative efforts of employees, farmers and the local community enabled Chobani’s remarkably rapid success -- success that has now enabled the company to support Team USA as its official yogurt sponsor.

The creative doesn’t specifically note that Chobani is a Greek yogurt brand founded by a Turkish immigrant, Hamdi Ulukaya -- the deeper background behind a classic American entrepreneurial success story. Nor does it specifically tout that Chobani, which first hit retail shelves in 2007, is now the U.S.’s #1-selling yogurt (and also now in Canada and Australia).

Instead, the television spot, being run in 60- and 30-second versions, shows the Chobani community coming together to build a giant outdoor LED screen to watch the Olympics at a farm near the company’s New Berlin, N.Y. headquarters, interspersed with action shots of the six Olympic and Paralympic athletes being sponsored by the brand: Lauren Cheney (soccer), Lashinda Demus (track and field), Matt Grevers (swimming), Steven Lopez (taekwondo), John Orozco (gymnastics) and Allison Jones (Paralypian cyclist and skier).

The voiceover message: “The Chobani story is a community story -- a story of revival. Five years ago, none of us could have imagined how it would unfold. We started with a handful of local employees and a whole lot of heart. The community came together, got stronger -- the dairy farmers, the plant workers, the truck drivers. Like our Olympians, all worked hard to fulfill a dream. Now our yogurt is powering our U.S. Olympic athletes, and we can’t help but feel a little proud. Chobani: Naturally powering Team USA.”

“As we have in the past, this campaign features the real people who were part of this story: the farmers, employees, members of the local community and even the Olympic athletes that make up Team Chobani,” Stern tells Marketing Daily. “The overarching theme of shared success, real people and transparency will continue to be tent-poles of Chobani’s campaigns in the future,” he adds.

“Nothing inspires people like a true story, and that's the real focus of this campaign,” observed Jay Benjamin, chief creative officer, Leo Burnett New York. “It's a story about a company that began with a handful of people, a lot of heart, and a belief in a product that was 'nothing but good’ [the brand’s tagline]. So good in fact, that it now powers our U.S. Olympic athletes.”

The campaign will officially launch with the airing of the TV spot during the Olympic Opening Ceremony on July 27, during which employees, farmers and local residents will gather for a Chobani-hosted viewing party. (Chobani, which now has 1,200-plus employees, is also sending its original five employees to London to attend the games, along with Ulukaya.)

Social media and online are major components of the campaign. “The social side of our communications with brand fans has always been a part of Chobani’s DNA -- it’s important to ensure that we’re present and have an ongoing dialogue where they spend a lot of their time,” notes Stern.

* A dedicated Facebook hub featuring numerous videos. One continues the community themed “story of revival”; another documents the story behind the brand’s Olympics sponsorship initiative; and a third offers behind-the-scenes footage of the TV spot shoot. Other videos feature interviews with the sponsored athletes.

* The brand’s site is spotlighting rotating photos of the sponsored athletes and prominently driving fans to the dedicated Facebook hub to “join the conversation.”

* Chobani’s branded YouTube channel also features the TV ad and the various story/interview videos. In addition, the brand is hosting a YouTube takeover, and “dedicating a significant amount of spend toward advertising with NBC.com,” according to Stern.

In addition, the campaign includes out-of-home/billboards -- each of which features an image of one of the sponsored athletes, the headline “Naturally Powering Team USA,” and a Chobani product shot -- as well as on-pack promotional messaging.

Digital agency Big Spaceship worked with Burnett New York on creative, and public relations is being handled by Fleishman-Hillard.