Interstate Gets Batteries, And Brand, To The Stranded 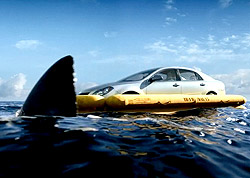 Car batteries get no respect. They are kind of like kidneys: you don't think about them until they stop working. Sure -- mileage, tires, motor oil, fun features, cosmetics and the transmission are important. But the works are just dead metal if the electricity stops.

"Yes, there's a group of consumers who really are loyal to certain [battery] brands," says Tyler Reeves, director of marketing, strategy and innovation at Dallas-based Interstate Batteries. "But what you really need are very timely solutions in semi-emergency situations. Because you don't think about a battery until it dies."

To get to the heart of it, the company is launching a campaign, via Dallas-based Firehouse, whose strategy is to outflank competitors DieHard, Exide and Duralast that have a retail distribution at places like Walmart. Interstate Batteries are sold almost exclusively in garages or general automotive repair shops, so the consumer exposure is limited -- and such operations are not typically open in the early morning, evenings or weekends, when people have problems. Thus, the idea is to get the Interstate batteries (and therefore the brand) to people when they really need a new battery.

The effort, 866-RESCUE-ME -- initially in Columbia, S.C. and Omaha, Neb., before rolling out nationwide -- gives people dialing in over-the-phone help, a connection to one of the company's 80,000 dealer partners (or independent repair shops), or free on-site battery installation.

"We kept looking at data that showed the majority of batteries were purchased in these emergency/semi-emergency situations," says Reeves. "We’re always looking for ways to make our brand promise come to life in a meaningful way to consumers. 866-Rescue-Me delivers on both fronts."

The effort includes a radio, TV, digital, out-of-home, mobile and search campaign. In addition to getting the number from ads, consumers can click a mobile digital ad, which delivers the 866-RESCUE-ME number to their phone contacts.

"Our brand is built on the promise of outrageously great service one battery at a time. The rescue program is an extension of this," says Reeves. "We are nationwide with good awareness among shops but from a consumer standpoint, not as well known, so we have opportunities." He tells Marketing Daily that the approach is a new one for the brand. "It's one thing to drive awareness with ads. This is different in that it shifts from awareness to solution. It also gives us measurable data: we will be able to see is call volume and lift in markets."

He adds that when the number goes nationwide, it will be a benefit from a business standpoint. "We have 80,000 locations that sell Interstate, but until this there was not one number you could call. We wanted to amplify that."

The humorous ad has a guy stranded in a parking lot that suddenly becomes the ocean, with his car floating around on an inflatable raft, and sharks circling.