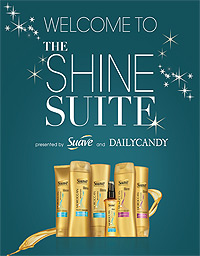 Unilever's Suave division is touting its high-end Suave Professionals line and its new Moroccan Oil Infusion products via a partnership with DailyCandy.com and NBC's "Fashion Star."

The campaign, which links to the Suave Professionals digital hub at Suave.com, is a high-end experiential invitation-only event in New York that pairs a viewing of the TV show with a "Suave Shine Suite" makeover experience.

The NBC “Fashion Star” viewing party at the Tribeca Grand gives DailyCandy's New York habitués a chance to attend a screening of the second episode of Fashion Star’s second season on March 15, and the finale on May 10. In addition to getting a makeover, participants get to hang with contestants of the current season and ogle the outfits from the first two seasons. Invitees can also participate in raffles to win merchandise from the show and from the program's retailers Macy’s, Express, and Saks Fifth Avenue.

The makeover element of the three-hour event is handled by "Suave’s Professional Styling Team" who use the new Moroccan Oil SKU under the auspices of DailyCandy. The tickets are available on Monday morning, with DailyCandy doing an email blast to its New York fans announcing the first-come, first-serve ticket offer at shinesuite.eventbrite.com. For Suave, the platform is an extension of its  “Shine Suite” trend site on Suave.com, the hub for a promotion dangling a $100,000 grand prize. The company partnered with celebrity Nicole Richie, who is promoting the contest online and in ads.

"We have a great ongoing relationship with Unilever," says Fernando Romero, VP of advertising sales for DailyCandy, adding that the media channel is in its second year supporting Suave. "Suave, specifically, is looking to connect with an influential customer, and they trust us to position them against the ideal consumer." He tells Marketing Daily that DailyCandy does several experiential events per month, some of them nationwide. Last season, the channel supported Suave with events in Los Angeles, Chicago and Miami, he says.