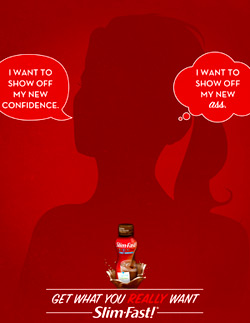 In its “Get What You Really Want” campaign, SlimFast is contrasting the “politically correct” weight-reduction motivations typically used in marketing by SlimFast and other weight-reduction brands with women’s “real” (franker and somewhat racier) underlying motivations.

The creative, from agency The Bull Whitehouse, aims to have “liberating,” humorous appeal to “Slimmers” (SlimFast’s term for the women it’s targeting).

Each of the print ads in the campaign uses two cartoon-like copy bubbles coming out of the mouth of a silhouetted form of a woman, with one conveying her stated, politically correct reason for losing weight, and the other (thought bubble) conveying her real reason.

The bottom of each ad shows an image of a SlimFast product, with the headline: “Get What You Really Want—SlimFast!”

“The truthful thoughts on why these women want to slim down are far more powerful, entertaining, motivating, hilarious and human” than their normally stated-out-loud reasons, says SlimFast director Wesley Boas. “SlimFast is all about helping women get their mojo back.”