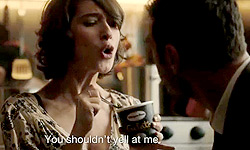 Häagen-Dazs – the ice cream brand with the Danish-sounding name that was actually created by a Polish immigrant in the Bronx in 1961 -- is celebrating all things Italian in its new campaign for the U.S. launch of its gelato line.

The “La Dolce Vita” campaign is kicking off with four TV spots airing on networks including Travel Channel, Food Network and HGTV (also viewable on the brand’s YouTube channel).

A 30-second spot shows an Italian couple arguing passionately in their native language (English subtitles provided), who are stopped short -- and turn suddenly loving (at least momentarily) when they spot a carton of Häagen-Dazs Gelato and share spoonfuls of the treat. The spot closes with a screen message/English-language voiceover: “Häagen-Dazs Gelato -- our new Italian masterpiece.”

Three 15-second spots each focus on one of the seven varieties of the gelato: Stracciatella, Limoncello and Cappuccino. In each case, the mouths of a series of Italian men and women are shown in close-up as each pronounces one syllable of the flavor’s name. Ending message: “New Häagen-Dazs Gelato. Even the name tastes good.”

(The other flavors in the gelato line are Sea Salt Caramel, Dark Chocolate Chip, Black Cherry, Amaretto and Vanilla Bean.)

“Our goal was to create a campaign that captures ‘La Dolce Vita’ and immerses our fans in the Italian culture through sight, sound and, of course, taste,” said Häagen-Dazs brand manager Cady Behles. According to the company, Häagen-Dazs is the first “super premium” brand to offer gelato.

Each ad pairs a Häagen-Dazs product next to an Italian-crafted item such as a leather shoe or violin, graphically illustrating the ingredients that are used to create each. In addition to the gelato, these ads will feature the brand’s Vanilla Chocolate Peanut Butter Ice Cream Bars.

Häagen-Dazs has also created a multi-channel program called “L'Artista Della Serie,” which showcases a group of seven artists selected for their “visionary approach to their craft.” These artists traveled to Italy in March to immerse themselves in the country’s culture and craftsmanship, then created their own limited-edition works of art conveying the “la dolce vita” philosophy. Those works will be unveiled weekly, and given away to members of Häagen-Dazs’s social communities and its gelato fans throughout the summer.

Bios, photos, tweets and other content from the artists are being featured on an #HDMoment Tumblr page. The L’Artista Della Serie program will also be supported on the brand’s Facebook, Twitter and Instagram channels.

In addition, this summer, starting in May, consumers can log on to Twitter and use the hashtag #Twitaly to post a review of the brand’s new gelato flavors. One reviewer will win an all-expense-paid trip to Italy that includes a tour of the Italian countryside, a stop in Rome, and courses on how to make Italian gelato.

Häagen-Dazs products are made/marketed by Nestlé’s Dreyer’s ice cream subsidiary. In the U.S., the Häagen-Dazs trademark is licensed to Nestlé by General Mills.