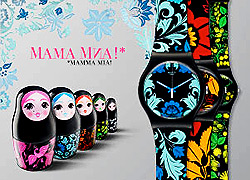 While much of the marketing world may be buzzing about Apple’s looming iWatch and its Samsungian rival, others are flocking to Switzerland for the real thing: Baselworld, the annual Swiss trade show devoted to all things watches, is expected to draw more than 100,000 from over 100 countries this year, including 3,500 style-savvy fashion journalists.

Swatch is among the brands creating the biggest buzz, and is making its debut at the show this year, in part to celebrate its 30th anniversary. In addition to special exhibitions showcasing its partnership with artists and fashion designers, it’s also highlighting special collections, including the Kalinka – Malinka line, designed for Mother’s Day. Earlier this year, Swatch said it expects its sales to gain between 5 and 10% this year.

Seiko, celebrating its 100th anniversary, is also making a splash. The company says it is winding up its U.S. presence, and plans to return to broadcast advertising this August, introducing a new “Seiko Nation” campaign, starring U.S. soccer players Landon Donovan and Hope Solo, as well as eco-entrepreneur Graham Hill and ballet dancer Jessica Saund.

The campaign, which is also scheduled to include print, digital and social marketing channels and point-of-sale executions, is aimed at “self-expressed watch seekers,” and will call out such traits as individuality, intelligence, independence and relentless innovation.

LVMH’s TAG Heuer is also marking an anniversary at this year’s show, with a special exhibit commemorating 50 years of its Carrera. (LVMH, which also owns Hublot and Zenith, says sales in its watches and jewelry division gained 6% last year.)

Industrywide, the Federation of the Swiss Watch Industry says that 2012 sales of Swiss watches gained an impressive 10.9%, buoyed by a 20.5% jump in gold watches. (Gold watches account for 94% of its watch export by value, but just 2% by units. Steel watches represent 53% of volume.) The biggest gains were in the U.S. market, with sales up more than 15%.