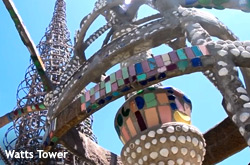 General Electric, which has done brand activation on BuzzFeed longer than just about any other brand, is using the content channel as a launch pad for a new mobile and desktop app, "GE Wonderground." The game lets users do tech-centric virtual tours of cities like Los Angeles, New York, Boston, Chicago and San Francisco.

Central to the effort are BuzzFeed photo content pages, "10 things you probably never knew about New York City," and "10 Things You Might Not Not Have Known About Los Angeles"; and a video on hidden gems of Los Angeles voiced by EVP of video at BuzzFeed, Ze Frank.

In the whimsical video, Frank talks about how easy it is to miss local wonders by focusing on exotic ones far afield. After the video, offering glimpses of such oddities as Watts Tower and the Angels Flight funicular in downtown L.A., comes a static page touting the GE Wonderground game with the headline "See what others miss."

The effort, broadly speaking, supports GE's 10-year-old corporate campaign "Imagination at Work." The company has done a lot of big-media advertising around the campaign to talk about how imagination informs innovation. The company's recent spot illustrating its panoply of hospital technology with narration by actor Hugo Weaving, reprising his Agent Smith role from "The Matrix," and a spot featuring the Knight Rider talking car to tout GE's connected locomotive are a couple of examples. The company has also done its share of digital/social efforts, such as "GE Flyovers" where public voting on GE social platforms determined which GM assembly buildings, skunk works and design facilities a camera-mounted robotic helicopter flew over, inside and around.

The Wonderground app, narrated by futurist/filmmaker Jason Silva, gives an overview of big cities from the perspective of science, design and industrial technology. A map overlay allows users to click on representative icons to "visit" a city and get a 360-degree immersion in various sites, like Grand Central's whispering wall. None of the videos talk about GE technology, per se, but the connection is clear.

"That GE brings technology, and scientific progress to cities around the world is really what the game's about; the video is really promoting that game," says Jon Steinberg, president of BuzzFeed. He tells Marketing Daily that while the effort is a public-facing corporate image push, at some level it also "Helps them to help sell locomotives, substations, jet engines," because "We index very high for people in senior-level positions making purchase decisions. With the political coverage we have, we also have significant numbers of people in government who read us. A lot of people who are consumers, who are on the Web, also influence industrial purchase decisions."

Steinberg says GE signed on with BuzzFeed in 2010, two years after the channel was founded. He adds that the company is always activating on the channel, rather than doing a program and vanishing for several months.