Skyy Launches 'Be Part Of The Art' 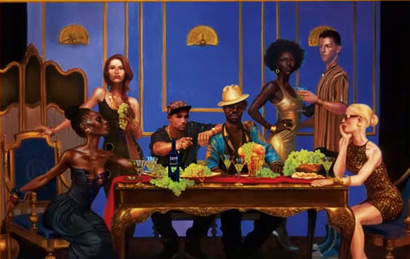 To support the debut of its new Skyy Infusions Moscato Grape variety, Skyy Vodka has launched a campaign that combines an art-gallery theme and a hip-hop sensibility.

The “Be Part of the Art” campaign, developed with agency partner Lambesis (La Jolla, Calif.), launched May 20 with television ads and accompanying online/social activations.

In the first TV spot, the camera pans into a painting hanging on a gallery wall, showing a group of hip young men and women enjoying cocktails made with the new Skyy moscato, in a “Versailles meets hip-hop” setting. As the viewer is drawn into the painting, original music (“I Stand Alone”) from hip-hop artist Theophilus London sparks the figures to come alive, dance, clink glasses and jump out of the frame to share the cocktails with those in a nearby painting.

The TV spots will be aired on national cable networks including Bravo, ESPN, E! Network, BET, Oxygen, Style and FX.

The TV ads are being accompanied by digital site takeovers, rich digital media, billboards, transit ads and large-format wall installations in the U.S., rolling out throughout 2013.

Skyy is simultaneously launching a "Be Part of the Art" social media campaign, in which fans from around the world are invited to contribute to a “Moscato Mosaic masterpiece.”

Consumer photos submitted via Skyy Vodka’s social media channels using the hashtag #BePartoftheArt will be added to a giant store-front canvas displayed in New York City, to create an original mosaic mural. The mosaic will also be featured on the brand’s Facebook page.

“Blending the remarkable works of Anthony Mandler, Kadir Nelson and Theophilus London helps us to ignite and inspire a thirst for not only the first-ever Moscato Grape infused vodka but also a thirst to be a part of a sexy, trend-forward, sophisticated world of art and nightlife,” said Umberto Luchini, head of marketing for Skyy parent Campari America.

Skyy has a history of employing artists and art themes to portray the brand as both sexy and sophisticated. It’s “Skyy Sexy”campaign, launched in 2010, featured provocative, pop-art-influenced images by photographer Raymond Meier, including a woman’s red-vinyl-booted legs wrapped around Skyy’s trademark blue bottle. (That campaign’s edgy sexuality drew criticism from some consumer watchdogs.)

Other Skyy campaigns have featured the work of photographers Moshe Brakha and Matthew Rolston, as well as photographer/independent filmmaker David LaChapelle.