Episode 612: 'The Quality of Mercy,' or, Jewish Mothers, Crying Babies, And They Shot Kenny! 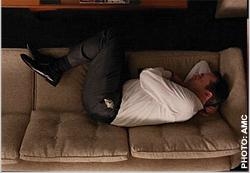 The title of this season’s second-to-last episode (yikes!)  is “The Quality of Mercy,” which comes from Portia's famous speech in Shakespeare’s “The Merchant of Venice.” Lest Shakespeare seem too highfalutin' a reference, the writers also liberally sprinkle in allusions to “South Park,” Patty Duke, The Monkees, “Plop plop fizz fizz” and Roman Polanski.

Add to that Don’s incredible “wah-wah!” moment, Joan’s turn as an old Jewish lady, and Roger’s magnificent delivery of this unexpected gem: “Lee Garner Jr. made me hold his balls!” -- and we’ve been given a bright and shining episode to cradle, like a golden orb, in our hands.

So here’s the money line from “Merchant”: “The quality of mercy is not strain'd.It droppeth as the gentle rain from heaven…. It is twice blest: It blesseth him that gives and him that takes.”

But new examples of duality include bookending the episode with Don’s pathetic fetal funk, the result of the incredibly “bad judgment” that he has the temerity to accuse his sometime work twin, Ted, of having. (And thinking with a second head! What incredible levels of projection and hypocrisy, even for Dick/Don.) 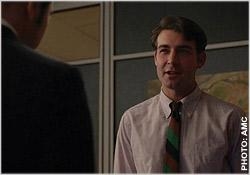 We later learn that there’s another DD doppelganger in the office, BB: Bob Benson, a Xerox of an invisible-ink copy of Don. In truth, Bob had actually been a “man servant” to a finance senior vice president, who took him on a cruise, where he probably met his own “Manny.”

But this week, the real funk has to do with Don and the women:  he has lost and damaged Sally, and, later, Peggy. And with Sally’s sordid discovery, there’s no more Sylvia to kick around anymore. (Nixon reference!) And God knows why Megan is hanging around to mother him and be ignored, but that’s another story.

Indeed, the show opens with Don sleeping in his daughter’s bed, mourning a child who is now lost to him, who saw him as heroic and now calls him “disgusting.” It ends with an overhead shot of him lying in a fetal position on his office sofa after his only protégé  calls him a “monster.”

There were also lighter twin moments: Home with his joint poultices of Formula 44 and a vodka a la Tropicana,  Don watches Megan on her soap opera playing her own evil twin with such a remarkably bad, Pepe Le Pew-level French accent that he has to turn it off. Then he changed channels to find the “Patty Duke Show” on. That was the ultimate non-twin twin story, as the theme song explained it: “But they're cousins/Identical cousins all the way./One pair of matching bookends,/Different as night and day!” 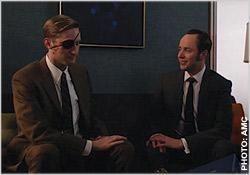 A hot dog might have made Patty famously “lose control,” but coming back from Detroit, Ken is a wounded warrior who now hates “steaks, guns, and yahoos in cheap suits.”

His shoot-'em-in-the-face hunting scene with the Chevy men was one of the most deliciously written bits ever (and much more believable than the “Sopranos”-like nightmare driving scene.)

While the clients were getting in digs at Ralph Nader, we got a sly Dick Cheney buckshot reference.

If you recall, Cosgrove was the one who introduced the ride-on mower indoors in the office at that fateful Christmas party with the Brits that resulted in high spirits and some very bloody ankle mulching.  In “Merchant” terms, it is impossible to produce a pound of flesh, so G-d, (and/or Matt Weiner) has taken an eye for a foot.

Ken’s dashing, Arrow-collar eye patch is also a callback to the Moshe Dayan poster over Stan’s bed in the last episode.

But let’s get to the Ted offensive: Obviously, in the last two months, Ted and Peggy have spent considerable time in the bog, drunk on Cran-Prune and love. (I thought the comically mocked combo names alluded to the surprisingly short post-merger name of the agency, with no there there.) 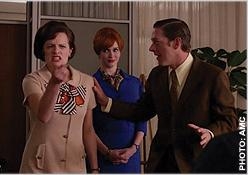 Ted wants to give Peggy a few things, but also a Clio, and displays that same twinkly, smiley, shot-by-Cupid’s-arrow behavior in the office that Don exhibited once he married Megan. (And which Peggy had to put up with.)

The commercial for St. Joseph’s Aspirin that Peggy is so proud of is based on the movie of  “Rosemary’s Baby.” (For the Megan-wearing-the-Sharon-Tate-T-shirt conspiracy theorists, Roman Polanski, aka Sharon Tate’s husband, directed the film.) It is the story of an immaculate conception, except this time the baby is the spawn of  the devil. (Hello, “Dante’s Inferno,” Don’s light vacation reading!)

The religiosity of the spot also alludes to Peggy’s previous ice pop commercial, which showed Mother Mary breaking the frozen treat in two. And this ad ends with a mother (Peggy, who gave up her own child in a birth she denied ever happening) bathed in white light, who can step away from the evil coven to depend on her own immaculate instinct about what the crying baby needs: St. Joseph’s, with its own sanctified plop plop fizz fizz. That’s a long way to go to sell baby aspirin.

But my favorite mother/child scene involved Betty and Sally. Obviously, both parents are extremely relieved that Sally is going to be out of their hair. 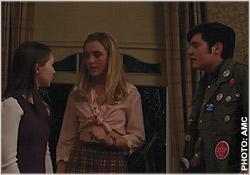 Betty herself is very into this Miss Porter’s  thing. (She wanted to go to Rosemary Hall, but her parents wouldn’t let her.) It gives her bragging rights, and also a connection to alumna Jackie Kennedy, who has just shocked the world by becoming Jackie O. (Don points out that both Jackie and Betty married well, twice. Twins!)

Sally summons all of her courage, knowledge of booze, and connections to pass the mean girls’ test.

Shockingly, Glen comes climbing into the dorm window -- now a somewhat dashing young man, not creepy at all. The way Sally fends off the sexual attack (with Glen to the rescue!),  shows that Sally is not doomed at all, but preternaturally mature and in control. Again, compared with her father, now in his infancy, and her mother, a teen peer (conspiratorially sharing her smokes on the way home), Sally is the adult in the family. The decision to go to boarding school might  save her.

I was afraid that someone would die during this episode, and was relieved that the violence amounted to a loss of an orb. The loss of Ken’s eye has allowed Pete to get his foot in the door in Detroit. He seems to have matured since he outed Don and nothing came of it. He negotiated a détente with Bob, and now he’s polishing up his rifle for the move.

Will Don pull back the throttle, as Megan suggested?  Or will Pete find a new hell? Stay tuned!

mad men, tv
22 comments about "Episode 612: 'The Quality of Mercy,' or, Jewish Mothers, Crying Babies, And They Shot Kenny! ".
Check to receive email when comments are posted.
Read more comments >
Next story loading