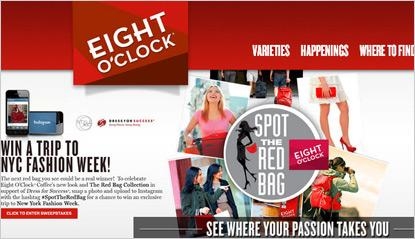 The more than 150-year-old brand (launched in 1859) has introduced new packaging, new varieties and a new marketing campaign that includes its first television campaign in seven years, cause-related event participation, a sweepstakes, social media and other elements.

The brand's new red bags, being rolled out at retail over the next two months, feature a sleeker, contemporized look. The new ground coffee varieties include African Plains, Caramel Macchiato, Dark Chocolate Cherry and Cinnamon Bun (the last two are seasonal). A 100% Arabica whole-bean variety also has been added.

Eight O'Clock is kicking off its marketing push with a redesigned Web site, and a social media-driven sweepstakes tied in with an integrated presence at fashion showcase STYLE360 during New York Fashion Week 2013, in September.

During the event, designers will showcase handbags inspired by Eight O'Clock Coffee's new red bags: The Red Bag Collection in Support of Dress for Success.

The brand's "Spot the Red Bag" sweepstakes offers a grand prize of a trip to New York Fashion Week in February 2014.

Consumers can enter by snapping a photo of any red bag -- including one of the brand's new coffee bags, one of the Red Bag Collection handbags shown at Fashion Week 2013, or one they spot on the street -- and uploading it to their (non-private) Instagram accounts with the hashtag #SpotTheRedBag. They can post as many photos as they like during the sweeps period, but are limited to one entry per person/Instagram account per day. Eight O'Clock has the right to post a comment to any entry photo submitted.

The TV campaign, which will launch on the Emmy Awards on Sept. 22, will consist of a series of 30-second spots featuring scenarios in which Eight O'Clock Coffee lovers "put coffee first," according to the brand.