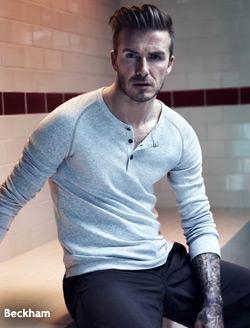 For its new fall campaign for David Beckham Bodywear, H&M follows the soccer legend into an old-school locker-room, photographing him in what the retailer refers to as “heritage” skivvies – think athletic greys, Henley t-shirts and classic boxers.

The Swedish fast-fashion retailer, whose previous collaborations with Beckham have included a Guy Ritchie video that had Beckham tearing across Beverly Hills in his undies, says this collection is the result of 18 months of research, and a line that focuses most on “fit, fabric, style and comfort.” Ads are breaking now, and the line, which also includes pajamas and tank tops, is scheduled to be sold at the Swedish chains 2,800 stores, in 49 counties, as well as online.

In a release about the effort, Beckham says the collection is “already like the wardrobe favorites for me that I know I’ll wear all season long. It was great to shoot them in an old-fashioned East End changing room. It was like I had gone right back to my roots.”

Market researcher NPD Group reports that while consumer spending in many categories of men’s clothing have been relatively flat, underwear sales are hot, and grew 13% last year. And sales of those purchased in specialty stores, such as H&M, are up 29%.

H&M is also busy promoting its website, with its U.S. ecommerce business finally coming online this month. To woo e-customers, H&M U.S. is offering exclusive online pre-shopping for its Paris Show Collection, which isn’t expected to be available in stores and on other region’s websites until Sept. 5.

And it’s also just opened a popup shop in New York City’s Meatpacking District to give customers a glimpse into the world of H&M e-commerce. The pop-up features the Paris Show Collection, a Try-On-Lab, and a virtual check-out system where customers can make purchases via iPads.