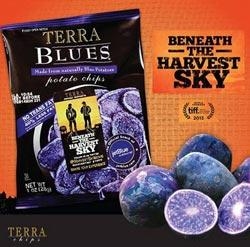 Hain Celestial's Terra Chips has formed an unusual partnership with the makers of an independent film, in which they are collaborating to cross-promote the movie and the snack brand, sans heavy-handed in-film product placements. The movie, "Beneath the Harvest Sky," is the first fictional feature film from indie filmmakers Aron Gaudet and Gita Pullapilly, up to now known for their documentaries (such as the Emmy-nominated "The Way We Get By").

The connection: The new film is a coming-of-age story that's set in Van Buren, Maine -- on a family farm (owned by the LaJoie family) that is Terra Chips' primary supplier for the blue potatoes used in its Terra Blues Potato Chips.

The story line involves the testing of the friendship between two local teenagers (played by Callan McAuliffe and Emory Cohen), as one works his last harvest on the farm to earn the money for the two to start new futures, while the other gets caught up in the illegal drug trade between Maine and Canada.

For Terra Chips, which has been highly selective about marketing integrations, the movie partnership represents a way to continue the brand's "narrative" around its real-life partnerships with the LaJoie farm and other family farms in an authentic, realistic way, Jared Simon, director of marketing for Hain Celestial Snacks, tells Marketing Daily. The brand expects the film to expose a broad audience to the story of how the hard work of family farmers growing diverse crops results in consumers being able to enjoy Terra Chips snacks, he says.

The film, which made its debut at the Toronto International Film Festival on Sept. 8, is in the process of seeking national and international distribution.

Before filming began, Terra Chips agreed to supply funding (amount not being disclosed) for marketing support for the film. However, most of the deal involves "in kind" benefits and cross-promotions, reports Simon.

The brand and the filmmakers agreed up front that Terra Chips would not interfere in the film's artistic vision -- the brand's visible product placement is limited to a Terra Chips truck being shown picking up a load of blue potatoes at the farm during the film, according to Simon. "We wanted the filmmakers to make the film they envisioned, and for Terra Chips to get credit [with the film's audience] for supporting a quality film," he says.

In a Q&A on the film's Web site, its co-writer/producer/director Pullapilly explains that she and Gaudet realized how important Terra Chips is to the LaJoie farm and the economy of the town of Van Buren while they were researching the story for the film, which in turn spurred the idea of "reaching out" to Terra Chips to see if they could work together. She also stresses that the relationship was feasible because Terra was amenable to "seamlessly integrating" the brand "without sacrificing the art."

Simon reports that the filmmakers, through work with a Harvard Business School business-plan-related field project, presented Terra Chips with demographics and psychographics for independent film viewers/arts enthusiasts. These meshed nicely with Terra Chips' consumer profile: Fans of this leading, premium-priced vegetable chip brand tend to be well-educated, affluent and sophisticated, he says. Further, the film is expected to appeal to teen and young-adult consumers,  key target groups for the brand, he adds.

Terra Chips is already promoting the movie on its Facebook page, and had a presence at the Toronto festival -- selling bags of Terra Blues stickered with a promotion for the movie, and distributing samples of those bags at the event's parties.

But most of the promotional efforts will commence once the film's distribution deal(s) are finalized (the goal is to follow a theatrical release with distribution via media such as Blu-ray/DVDs, VOD and digital streaming), Simon says.

The specific nature of many of those promotions will depend on the details of the movie's actual distribution deals. But the efforts will include promoting the movie on bags of Terra Blues, as well as employing Terra Chips' Web site and social media assets.

The brand is also talking with some of its own partners about participating in potential marketing initiatives based on the movie, reports Simon. (Although no such plan has been announced, Jet Blue would seem to be one obvious possible third-party partner, since Terra Chips is the "official snack" of that airline.)

Simon says that there will be many potential opportunities over time to connect with people who have seen the movie in theaters or through other channels, including product sampling and rewarding brand fans via movie-themed activities such as sweepstakes. Around the film's release, the brand will also be sharing with its fans opportunities to be the "first to see interesting content" that will be posted on the movie's Web site and Facebook page, as well as in other media.

Another key benefit, from Terra Chips' standpoint, is that as part of the deal, the filmmakers created customized content that the brand can use for marketing purposes: a two-minute documentary on the LaJoie farm and its longstanding relationship with Terra Chips.

For the filmmakers and their company, Sunny Side Up Films, the partnership offers marketing/promotional support rarely enjoyed by indies. Equally important, having that support up front provides negotiating leverage with distributors.

According to Variety, Sunny Side Up employed an agent from Manatt, Phelps and Phillips to negotiate the deal with Hain Celestial.