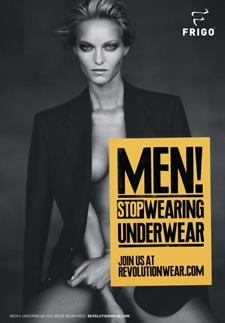 Will consumers spend up to $100 for a pair of underwear? The Swedish brand RevolutionWear is hoping so. The company is charging top dollar for its line of Frigo underwear, which uses engineered fabrics and such functional design elements as laser-cut vents for aeration and an adjustable mesh pouch with a lock adjustment system for custom fit.

The New York-based company, with global operations in Sweden, is getting the word out in the U.S. with a campaign comprising out-of-home, print, digital, online video content and a TV component. Creative features Swedish supermodels whose message is "No Man Should Wear Underwear."

The idea is to subvert the typical "hunk" ads for underwear, while showing that women have a major role in which underwear men don. One video shows a model reacting with disdain and horror to various traditional underwear types. The campaign drives to the company's Web site, where the company is also doing a sweepstakes-based giveaway of 1,000 pairs of the underwear, with participants increasing their chances by spreading the word on their social channels.

Mathias Ingvarsson, CEO of RevolutionWear Inc., tells Marketing Daily that social media is, in fact, a keystone of the campaign, whose TV component starts in December. "Social media is critical," he says. "We don't need to spend $60 million because social together with print and outdoor, and the product itself, will build demand." Print, he says, is in the men's lifestyle vertical in books like Men's Health, Sports Illustrated, Esquire, and GQ.

Two years in the making with an assist from materials scientists at Lulea University of Technology in Sweden, the product went to market a year ago. In the U.S., Frigo will be at Lord & Taylor, Macy's, Neiman Marcus, as well as FreshPair.com. Ingvarsson says he expects the products to have wide appeal. "We tested this in-store in Beverly Hills just to see what customers we got. Really, it's everyone -- super-athletic people, 75-year-olds, people with weight issues -- really, it ranges from 15- to 90-year-olds."

The company, which is also testing other apparel lines including socks, suit materials and swim shorts, per Ingvarsson, is also running programs in Europe, Iceland, Israel, Sweden, Switzerland, Slovakia, the Czech Republic, and Thailand. He says the competitive set for the product is "Everyone, including everyone who calls themselves 'super,' or 'performance,' or 'comfort,' and that's good because I'd like to see the category grow; there's a huge market, and there are great competitors out there."