To get people prepped for “tax season” -- or maybe to help them cope with bad bets made on the Super Bowl -- Financial Service brands took to online video in a big way following the big game. A group of approximately 85 Financial Service brands combined to spend 179% more on online video ads via real-time bidding (RTB) in the 24 hours following the Super Bowl compared to the 24 hours before the game.

The data comes from LiveRail, which last week shared that overall demand for online video ads the day after the Super Bowl was three times that of an average day. 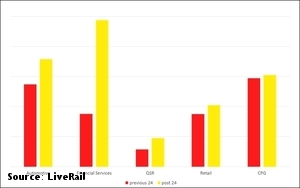 However, Automotive marketers still spent 31% more after the game than before, which supports LiveRail’s earlier assertion that demand increases following the game. Quick Service Restaurants increased overall spend by 66% following the game, while retail increased spend 17%.

In what LiveRail described as the biggest surprise, Consumer Packaged Goods (CPG) advertisers did not spend a significant amount more following the game.

The same is true for Alcohol advertisers, but a LiveRail representative reasoned that this might be because “these ads really are ‘content’ that people are seeking out post-Super Bowl, and in some cases these brands strategically released the ads prior to the game. It’s clear from YouTube that these ads are getting upwards of 32 million views on their own without having to run a campaign. That being said, we've already started to see some of them become part of campaigns and expect more in the coming weeks.”

This data supports the theory that the Super Bowl is immensely important to all advertisers, not just on TV. But is Financial Services the real “winner” here, simply because they spent the most for their online campaigns?

I would argue that the Alcohol marketers are the winners here. I agree with LiveRail’s theory that current Alcohol ads are more like content; they take advantage of the fact the Internet is a free on-demand channel