Mindshare Puts Clients In 'The Loop' 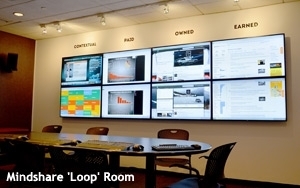 WPP’s Mindshare is trying to change that with a new system it calls The Loop, which is designed to allow clients to change paid-media plans in response to events as quickly as it responds to consumers evoking opinions about them in the social media space.

The agency is setting up real-time marketing war-rooms in each of its North American offices equipped with banks of TV screens that track the implementation of advertising and marketing programs of clients and competitors and how consumers are responding.

Mindshare is signing deals with a number of third-party analytics vendors to provide clients with as much granular detail as their plans call for about how their marketing efforts and their competitors’ campaigns are (or aren’t) resonating with consumers.

The vendors include iSpot.tv, which bills itself as a real-time platform for tracking TV ads. The platform records, tags and tracks activity around national TV commercials and measures placement and spending. It also correlates connections between TV ad airings and the likes, shares, tweets and votes across Facebook, YouTube and Twitter that occur as a result of the on-air ads.

Mindshare has also signed Ace Metrix, which polls thousands of viewers online to measure the effectiveness of TV ads. Under the agreement, Ace will feed real-time effectiveness data on every nationally breaking TV and digital video ad into the Loop system to help Mindshare teams and clients quickly adjust ad schedules.

The Loop system will also integrate data from Moat, the real-time digital ad platform that identifies digital ads through a combination of techniques including machine learning and crowd-sourced identification.

Other third-party sources, as well as Mindshare’s own proprietary media spend and performance tracking systems, also interface with The Loop.

Up to now, says Mindshare North America Chief Strategy Officer Jordan Bitterman, real-time marketing “has been about owned and earned. In 2014 we’re adding paid.” He notes that most client media budgets average about 70% paid media and thus it’s critical that real-time systems track that space.

The need for adding paid to what Mindshare calls its “adaptive marketing” approach became apparent during a 2012 UK search campaign for Kleenex. Over 95% of the searches during the flu season appeared to align with a major commuter rail line where the campaign was focused. By re-directing paid media along the rail route the campaign achieved a 40% sales lift, said Bitterman.

Adding paid to the real-time marketing mix could have ramifications for upfront media buys. While the upfront process will continue to serve a purpose, “some dollars need to be flexible,” said Bitterman. The degree of flexibility will vary by client, he said.

While adding paid to the real-time marketing mix is “the cornerstone of what we’re doing,” said Mindshare Chief Data Officer Bob Ivins, owned and earned components are also being tracked. The agency has a deal with Curalate, whose data is also being fed into The Loop. That company measures earned and owned interactions with a brand’s visual assets across social channels to identify imagery that resonates with consumers.

While a number of major clients have signed up for The Loop, Mindshare isn’t releasing names yet.

According to Ivins, The Loop “was built on our own time and dime.” But participating clients will be asked to contribute, based on packages of data that will be customized to their marketing game plans.

The Loop system is being deployed first in North America. Discussions are ongoing within the agency as to how and when it will be rolled out globally.