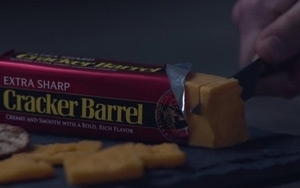 A new integrated campaign for Kraft Foods Group's Cracker Barrel from Droga5 New York, dubbed "Deliciously Different," uses an unexpected twist to reinforce the message that this is not your run-of-the-mill cheese.

The first 30-second TV spot, "Late Night," shows a man enjoying Cracker Barrel with crackers and a glass of wine, in dim lighting, leading the viewer to assume he's having a late-night snack in his kitchen.

The kicker: "And instead of shooting this commercial on a sound stage, we just broke into some guy's kitchen and shot this while he was sleeping." Whereupon the lights go on, and an off-camera voice is heard demanding to know who's downstairs in his kitchen, as the Cracker Barrel intruder beats a hasty retreat.

This recently debuted TV ad and a second one to launch later this month will be running for the next few months across all dayparts on network and cable television.

The brand -- while well-established in various regions including the Northeast (it has annual sales of more than $130 million and presence in 16,000-plus retail outlets, according to trade reports) -- is now further expanding distribution across the country.

"Cracker Barrel cheese stands out in a typically anonymous category by doing things differently than other brands," she says, repeating the TV spot's ingredients and aging process messages. "With our 'Deliciously Different' campaign and 'Late Night' spot, we set out to reflect the brand's unique voice and create communications that are atypical of the category, in the same manner that our cheddar cheese product stands apart from the rest."

In-store promotions and a broad-distribution FSI coupon to incentivize trial are also in the plan.