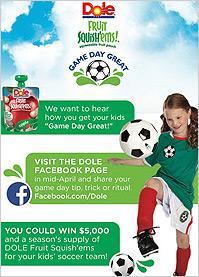 Dole Fruit Squish’ems is kicking off a partnership with two-time FIFA Women's World Cup winner Brandi Chastain, as well as a national sponsorship of the American Youth Soccer Organization (AYSO), as the organization's official fruit snack for 2014.

Youth soccer is a clear fit for Squish'ems — natural fruit in squeezable pouches that are portable and easy for kids to consume during outdoor or indoor games and activities, Stuka points out.

Chastain, who won worldwide fame for kicking the winning goal in the 1999 Women's World Cup game against China, is also a mom, and her "healthy, active lifestyle" is aspirational for kids, so she was a natural choice as a partner for the brand, he adds.

Chastain will share “Game Day Great” tips through posts and videos on Dole's Facebook page throughout the spring and summer.

She'll also be encouraging parents to share their own tips in the brand's "Game Day Great" Facebook contest at GameDayGreat.com, to earn chances to win a grand prize of a season’s supply of Squish’ems, $5,000 for their team and new backpacks for each player. The contest starts in mid-April. Chastain will choose the grand prize winner. (Ten finalists will also receive a season’s supply of Squish’ems for their teams.)

Through its sponsorship, Squish'ems has the ability to have presence at AYSO's local, as well as national games and events. The nonprofit organization has more than 50,000 teams, nearly 900 leagues and 500,000 players nationwide.

Squish’ems will also be the presenting sponsor for AYSO #SoccerFEST14 on May 3, an event designed to set the world record for "the biggest soccer pick-up game on earth." Players will be provided with Squish’ems-branded pinnies, and samples will be provided at some game locations.

Dole Fruit Squish'ems faces existing competition, including the GoGoSqueeze line launched by Materne North America in 2008, which now has $100 million in annual sales, and recently launched its own first national media program, including a television campaign. French-based parent Mom-Materne Mont Blanc has sold more than 1.6 billion of its resealable fruit pouches in Europe (where they're called Pom'potes) and more than 2 billion around the world.

Squish'ems launched in Canada in 2009, and by last year, U.S. consumer demand for a Dole-branded squeezable fruit product was strong, according to Stuka.

The market for fruit pouches has grown dramatically in the U.S. in the past few years, although their sales are still only about a quarter of those of fruit cups, he reports.

Dole, the leader in fruit cups and other single-serve fruit products, views pouches as an investment in the future, Stuka says, noting that while the market is currently largely limited to children up to about age 12, other age groups are also beginning to adopt the format.