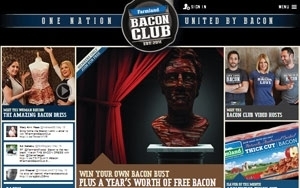 Extreme bacon lovers now have their own club.

Farmland, a Smithfield Foods subsidiary that makes bacon and a host of other pork products (corporate tagline: "Passion for Pork Since 1959"), has launched the Farmland Bacon Club, an online community.

"Farmland created the Bacon Club to give bacon lovers across the nation a place to connect, talk, post, view, influence and share their passion," senior brand manager Drew Lericos tells Marketing Daily. "We saw the club as a great way to engage with bacon fans while building awareness for the brand and driving brand loyalty. Through the club, we're able to connect directly with consumers that share a passion for pork, building relationships through exclusive content and exciting offers."

The club's hub, FarmlandBaconClub.com, offers a host of creative bacon recipes for breakfast, lunch, dinner, snacks and desserts (e.g., peanut butter and bacon cookies), and engagement activities including bacon trivia questions, the "bacon thetical" question of the month, and contests. The prizes for a currently featured members-only contest are a bust of the winner shaped entirely out of bacon, and a year's worth of free bacon.

The site also features several videos created as part of a new, multiplatform campaign based on the Bacon Club. (Registering as a club member is required to view most of the videos on the site, but they're viewable by anyone on the brand's YouTube channel.)

The videos feature TV personality Carrie Keagan and YouTube stars The Brothers Riedell. In some, a chef shows Keagan how to make bacon dishes like bacon-weave tacos. In another, a fashion designer shows Keagan the dress she made entirely out of bacon strips.

A third, with an introduction by the Riedell brothers added, is an actual video of a real "bacon wedding," where a couple exchanged vows in front of thousands of fellow bacon lovers (and attendants dressed as pigs) during the Blue Ribbon Bacon Festival in Des Moines, Iowa. Farmland bacon was used for bouquets, a "frying of the unity bacon" ceremony, and a post-ceremony shower of bacon bits.

The campaign also includes billboard ads, a mobile tour stopping at numerous events around the country this summer, on-pack and in-store promotions, and public relations support. In addition, the Farmland Bacon Club and the videos are being promoted on the brand's social assets, including Twitter and Facebook.

Farmland, headquartered in Kansas City, Mo., has $4.3 billion in sales and accounts for more than a third of the U.S.'s total annual pork processing capacity. It also makes a variety of meat products under the brand names Roegelein (in Texas), Ohse (in the Midwest) and Ember Farms (sausage). Farmland parent Smithfield Foods, based in Smithfield, Va., is the world's largest pork processor and hog producer.