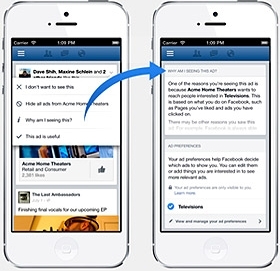 Facebook is significantly expanding how it targets ads on the social network by including information about the sites that users visit and mobile apps they use outside Facebook.

The company last fall began allowing retailers and marketers to retarget users who have previously visited their sites or maps. Ads can also be retargeted to Facebook users on the desktop through the Facebook Exchange (FBX), the company’s ad exchange, which dozens of demand-side platforms tap into.

Historically, Facebook also has offered interest-based targeting within the social network, based on users' declared likes and interests in their profiles, along with Facebook pages they had “liked.”

But now Facebook is taking the controversial step of extending that data collection to include the third-party sites and apps they use to improve the relevance of their own ads.

“Let’s say that you’re thinking about buying a new TV, and you start researching TVs on the Web and in mobile apps. We may show you ads for deals on a TV to help you get the best price or other brands to consider,” stated a Facebook blog post today.

The wider targeting starting in the U.S. means that Facebook will not honor do-not-track settings on Web browsers. That’s because “there is no industry consensus,” according to a Facebook spokesperson.

Facebook, however, said it would honor the settings to limit ad tracking on iOS and Android devices. The spokesperson also noted the company will “continue to work actively with privacy advocates, regulators and others to build consensus around what companies should do if they receive a signal.”

Facebook has long been able to monitor the Web activity of its nearly 1.3 billion users through the “like” buttons installed on millions of sites. For now, the company says it will not use social plugins, such as the like button, to improve ad targeting.

Instead, the company said it would use its conversion-tracking pixel, which advertisers drop on sites to track ad performance, as well as apps that use the Facebook software development kit (SDK) to provide services such as a Facebook login. Impression data from the “like” button recently added to mobile apps would also be included.

Facebook said it isn’t sharing any new information with advertisers or other partners as part of the expanded use of data for ad targeting.

Today, the company also introduced a new privacy tool to provide users with more control over the ads they see. When people click or tap a drop-down menu in an ad and choose “Why am I seeing this ad?” they will see a brief explanation, based on their interests and pages they have liked or ads they have clicked on.

Through an “ads preferences” settings page, people can then tell Facebook to remove or add interest-based categories it uses to show them ads. So if someone doesn’t want to see TV ads, she would remove electronics from the ad interests.

But those measures may not be enough to offset criticism of Facebook for stepping up tracking across the Web to help boost ad sales.

"As we see time and time again, user data is unknowingly being collected and tracked more and more across the Web and apps,” said Online Publishers Association CEO Jason Kint, in a statement issued Thursday in relation to the Facebook announcement. “Ultimately, consumers need a simple and effective way to not be tracked.”